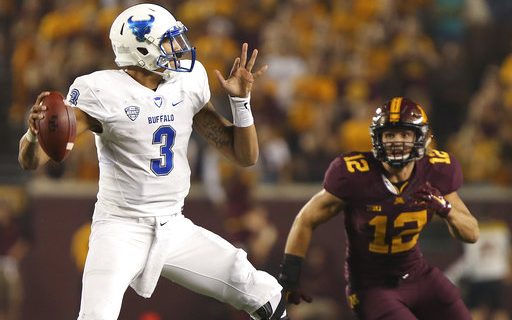 The most anticipated season in UB Football history starts Saturday with home game against FCS Delaware State.  The schedule determines the wins, which will or won’t meet the expectations.  There are no Top 25 opponents, only one game against a Power 5 opponent, and only two of the four non-conference games are against teams that went to bowl games last season. If the powerful Buffalo offense, led by QB Tyree Jackson & WR Anthony Johnson, can pile up points then this season could be magical.  Maybe more magical than anyone is expecting.

Last Year: 5-7, Head Coach: Chris Creighton 5th season
Players to Watch: DE Maxx Crosby and DE Jeremiah Harris, the two men combined for 17 sacks last year and give EMU the best DE duo in the conference.
Notes: Team must replace second best passer in team history in Brogan Roback.
This could be the best defense the Bulls face all year. EMU has a veteran offensive line led by Jimmy Leatiola. EMU has only been to two bowls in their history in 1987 and in 2016. Picked 4th in the MAC West.

Last Year: 4-8, Head Coach: Chris Ash 3rd Year
Players to Watch: LB Deonte Roberts had 104 tackles last year. CB Blessuan Austin is experienced and the Scarlet Knights top NFL prospect. Austin will be a good test for
Anthony Johnson.
Notes: Ash is known as a good defensive coordinator. Before being a head coach he was DC at Wisconsin and Ohio State. Rutgers is predicted to be the worst team in the Big 10. Last year they were out gained by 210 yards a game in Big 10 games. 15 starters return from last year’s team. Last year Eastern Michigan defeated Rutgers 16-13.

Last Year: 10-3, Head Coach: Jeff Monken 5th year
Players to Watch: RB Darnell Woolfolk over 1400 yards and 23 TD’s the last two years. SR LB James Nachtigal leads the defense and had 103 tackles as a first year starter in ’17.
Notes: UB should have won last year in West Point. This year they get Army coming off a trip to Oklahoma the week before. After it seems never being able to beat Navy, Army has now beaten the Midshipmen two years in row. Army must replace QB Ahmad Bradshaw who started 25 of the last 26 games; winning 18 of those games.

Last Year: 8-5, Head Coach: John Bonamego 4th Year
Players To Watch: RB Jonathan Ward returns and he was the MAC’s third leading rusher last year.
Notes: CMU went from QB Cooper Rush to Shane Morris last year. Morris didn’t miss a beat but now he has graduated. CMU returns only four starters on offense and only 10 starters overall. Many predicting a step back this year for the team as they have been picked 5th in the MAC West after going to four straight bowl games.

Last Year:7-7, Head Coach Terry Bowden 7th Year At Akron 13th overall
Players to Watch: LB Ulysees Gilbert- he’s been the teams defensive MVP the last two years. Gilbert is now a senior and led the team last year with 141 tackles.
WR Kwadarrius Smith- Akron’s top scorer returns. He’s a game breaker who ranked 9th nationally with 21 yards per reception in ’17.
Notes: Akron returns only five starters on offense and must replace QB Thomas Woodson. Woodson ended his career second all-time in yards passing for the Zips. Strange stat: The Zips were 7-0 last year in games they led at half and 0-7 in games they trailed at half. Team is predicted to finish 4th in the MAC east.

Last Year:11-3 Head Coach Jason Candle 3rd year
Players to Watch: A trio of WR’s in Cody Thompson, Dionte Johnson (1st team all MAC), and Jon’Vea Johnson (82 recptions 15 TD’s the last 2 years). Safety Kahlil Robinson leads the defense. Robinson had 67 tackles last year.
Notes: This team must replace their QB Logan Woodside and three starters on the defensive line. The Rockets have one of their biggest games at home this year as Miami of Florida will visit the Glass Bowl on September 15th. Toledo is picked second in the MAC West. Toledo is tough at home. Last year they were 6-0 and they are 30-6 over the last six years at home.

Last Year:  2-10, Head Coach Sean Lewis First year
Players to Watch: RB Justin Rankin: he was the team’s leading rusher and receiver the last two years. LB Jim Jones made 151 tackles and 11 for loss last year.
Notes: Lewis comes over from Syracuse and is a Dino Babers clone. He loves to run a very fast paced offense. Last year Syracuse led the nation with 87 plays per game. Look for Kent to take some lumps early as they play at Illinois, at Penn State and at Mississippi in three of the first four weeks.

This is the only time in my life that I can say that 12-0 is on the table for this year’s Bulls team. The Bulls will have the best QB and the best WR every time they take the field. The Bulls have a few tough road games at Toledo and at Ohio in conference. I predict a 9-3 season for the Bulls this year.

How are the Bulls dealing with these expectations?  By not talking about them.