Dahlin Important Piece For A Winner 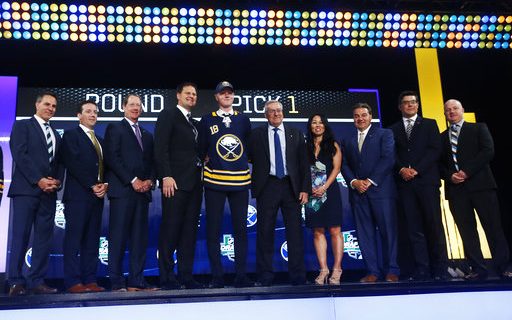 Rasmus Dahlin, center, of Sweden, stands on stage after being selected by the Buffalo Sabres during the NHL hockey draft in Dallas, Friday, June 22, 2018. (AP Photo/Michael Ainsworth)

The Buffalo Sabres selecting Rasmus Dahlin with the first overall selection in the NHL Entry Draft was a no-brainer. Much like Auston Matthews, Connor McDavid, and Aaron Ekblad in recent drafts, there was no question he was the number prospect. We can argue which of those previous three players is the best right now (Matthews might be), but you don’t lose with any of them (or Eichel for that matter).

Being the best player in the draft is one thing, but being the best defenseman matters even more, especially for the Sabres. The Sabres desperately need a franchise defenseman, one that can be trusted to control the game from the blue line. In recent years, Tyler Myers was thought to be the guy after an incredible rookie season. It didn’t work out that way, even though he has turned out to be a good player in Winnipeg. Zach Bogosian was acquired in that deal and was going to help steady the back end. Injuries curtailed that and slowed him down. When he came into the league with Atlanta, he was a fast skating, offensive defenseman. He’s not that now, and it’s too bad.

The other Rasmus (let the confusion ensue), Ristolainen, is a very good player that has logged way too much ice time. He’s has handled all the pressure, perhaps too much for a young veteran. He’s not a franchise blue-liner, but he’s a darn good one, top 4 for any team in the league. He would garner a good return via a trade, but the rumors and suggestions of moving him baffle me. You keep good defenseman because they are hard to find, and you rarely get to draft them. This year is the exception.

Dahlin projects as a franchise defenseman, but results are not likely to be immediate. He will not save the franchise next season. The Cup is not coming to Buffalo in 2019. The Jack Eichel experience should have taught fans that. Eichel has been great, but the team has still been at or near the bottom of the NHL. One great player does not make it happen, but a few might.

Dahlin is going to be great. At least that’s what everybody is saying. And I mean everybody. Have you heard anything about areas of improvement for Dahlin? Nope. All you hear from scouts and media is how he’s the next Lidstrom, Karlsson, Hedman, or blend of the three. I get the Swedish comparisons, but give the kid a break. Those three have won 10 Norris Trophies combined (Lidstrom has 7). That doesn’t mean he won’t win one and be great. I hope he is because I enjoy watching excellent players and successful teams.

Sticking with “he’s going to be great” projections, this is excellent news for the Sabres. I believe you have to have a franchise, mobile defenseman to win the Stanley Cup. Most fans would settle for the playoffs alone, but ownership’s goal is to win the Cup. When you look at recent winners of the cup, you see hall of fame caliber forwards, and at least one great defenseman. Here’s a quick, short list.

Those teams have won 8 of the last 10 Stanley Cups. Zdeno Chara in Boston (2011) and a two very mobile offensive defenseman (Carlson and Niskanen) from the Capitals were not included. Chara is unique on his own, and I’m not ready to declare those other two great, but they are VERY good.

At the very least, Dahlin becomes the cornerstone on defense the Sabres have desperately needed. Eichel is a cornerstone at forward. The hope is Casey Mittelstadt joins the group in that category. I don’t believe Reinhart belongs as the 4th, and maybe Ristolainen is the guy. I’d prefer it be the coach, Phil Housley, who will need this team to take a significant step forward next season. He deserves at least that, and probably another given that this looks to be another season of transition. That’s not exactly what fans want to hear, but I believe it’s reality. But I also believe for the first time in a handful of seasons, the Sabres are building, not buying a team.