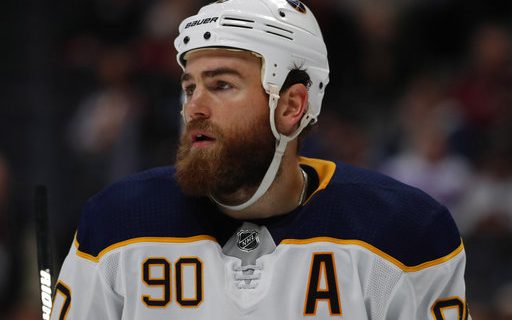 Buffalo Sabres center Ryan O'Reilly (90) and his beard could be a reason why the Sabres were were so bad this season, according to Jeff Wozer.(AP Photo/David Zalubowski)

Did Jason Botterill and the Sabres make a good trade with the St. Louis Blues? I think he did. It’s not perfect by any means, but it was good. Here’s a quick breakdown.

This heading could have said “Sabres Gave Up”  because that what’s they did with O’Reilly. They gave up on him. Sort of, but they were reading to move on from their 7.5 million dollar man. He wasn’t the leader he wanted to be with the Sabres, and he was never going to be. He was also overpaid, but that was the contract it took to get him to sign after he was acquired from Colorado.

I wanted O’Reilly badly when he was available. I like the way he played, and he was what the Sabres needed back in 2016. A veteran center that could play both ends of the ice consistently and lead the younger core. He had the consistent part down, but leading a beleaguered group didn’t work out so well. The team didn’t improve, and a star took away the spotlight. I don’t think that sat well with him, and management realized they weren’t winning with him, so he became available.

A lot came in return for O’Reilly. A prospect in Tage Thompson (hard shot), 1st rounder in 2019, 2nd rounder in 2021, center Patrick Berglund, and LW Vladimir Sobotka. That’s a big haul for one player. Thompson and the draft picks (particularly the 1st) are what matter most. It’s a move for the future. But the veteran forwards can’t be discounted.

Berglund is a good center, but not nearly as good as O’Reilly. He’s capable of scoring 20, if he can stay healthy. In his 9 seasons, he’s surpassed 70 games only 5 times. He’s also longer in the tooth (30) and has a cap hit of 3.85 million through 2022. That’s a lengthy deal, but one the Sabres had to take on to make O’Reilly’s deal fit with the Blues. It’s a contract that Botterill will look to either move, or buyout down the road. Sobotka falls into the same category, but with less goal production, and less time on his contract. He has two years remaining, and my guess is he’ll play those out on the bottom 6 of the lineup. That will work for the Sabres because one of the issues the team had was a weak bottom 6, along with a week defense.

I think this was addition by subtraction for the Sabres. O’Reilly had a huge contract, and the Sabres need more players with that money. They took on two of them to play now, and acquired a few for the future. That’s where this trade will hinge for Buffalo. The success of Thompson and the draft picks will ultimately determine if the Sabres won it.