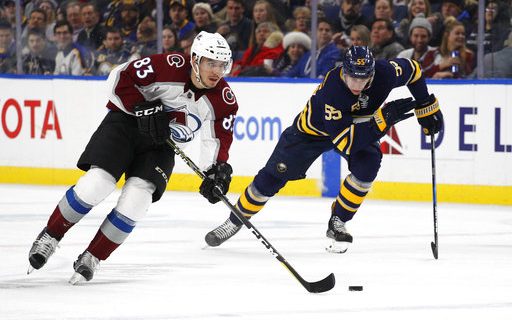 Sunday was a long, difficult day for the Buffalo Sabres.

The bad news started well before their night game with the Colorado Avalanche. The Sabres found out that Jack Eichel, the team’s top player and probably the best reason to see the team play in the last few months, had suffered an upper ankle sprain in Saturday’s game against the Boston Bruins.

Eichel will be out for something like four to six weeks – we’ll have to wait and see how his recovery goes – but there’s a chance that his season is over.

The Sabres responded to Eichel’s injury by beating the Bruins, but they couldn’t keep the momentum going the next night. The Avalanche defeated the Sabres, 5-4, before 17,646 in the KeyBank Center.

It was an odd game, featuring three short-handed goals by the two teams combined as well as a power-play goal each. But the most compelling subplot of the story was the play of Rasmus Ristolainen. The man who had been Buffalo’s best defenseman for much of the season had a night to forget. Ristolainen was on the ice for all five Colorado goals and finished with a minus-three rating.

“It could be preparation, confidence – I don’t see sharpness in his game,” coach Phil Housley said. “He’s got to refocus, get his game back.”

The first minute of play set the tone for Ristolainen in that sense. Nikita Zadovov of Colorado launched a pass of nearly 150 feet from his goal line to a waiting Colin Wilson at the Buffalo blue line. Wilson had gotten behind Ristolainen and Nathan Beaulieu. That led to a two-on-zero break, which was finished by Alexander Kerfoot. It was 1-0 at the 43-second mark.

Ristolainen said he didn’t know what happened, but added, “It should not happen. … We weren’t ready to play. They got some early goals, and it’s hard to come back in this league.”

The young defenseman’s problems multiplied as the game went on. His first period ranked up there with Bills’ quarterback Nathan Peterman’s play against the Chargers for the number obvious and potentially damaging mistakes. Yes, it was ugly. When the Avalanche made it 3-1 early in the second period, Ristolainen took a seat for five-on-five situations for the rest of the night.

“I didn’t get any explanation – you’ll have to ask him (the coach),” Ristolainen said about the reduction in minutes. “I have to play better. I played bad. That’s the coach’s decision, and I’ve got to respect that.”

Casey Nelson, the rookie defenseman of the Sabres, got a second-period reward for his good play of late when he scored his first NHL goal to get Buffalo within one. He bounced the puck off a charging Colorado defenseman to make it a 3-2 contest. Naturally, Nelson said a loss dampens any feelings about getting that first goal.

“The puck came to me, and I saw an opportunity,” he said. “I didn’t see him (the defenseman) coming. I just threw it (in the crease).”

Colorado appeared to put the game away with a pair of goals in the third period, but – as we’ve seen frequently this year – the Sabres made it interesting in the final minutes. Ryan O’Reilly scored a power-play goal with 7:46 left. It was a good reward for a veteran who clearly stepped up his game after the news arrived about Eichel.

“Ryan had a terrific game,” Housley said. “He was prepared, willing to go hard, and he got rewarded. He did everything he could do to help us win.”

Evander Kane scored his second goal in two nights in the final three minutes, and the Sabres had some decent pressure in the final moments. But the Avalanche escaped with a narrow win in a game that could have wound up something like 7-3 in their favor.

Next up is a Tuesday meeting with the Tampa Bay Lightning at home. The Sabres will have a little time to figure out how to adjust to the loss of Eichel, and see if they can compensate against one of the league’s best.

“Someone will have to get his ice time,” Ristolainen said. “Jack is a big part of the team. It’s not good we lost him. But we’ve still got 20 guys. We have to battle back.”