Teoscar Hernandez of the Blue Jays hits a ball down the third base line in a game played in Buffalo.

Back on September 8, 1915, the Buffalo Blues (also known as the Buf-Feds) of the Federal League played a double-header against the Baltimore Terrapins at Federal Field (Northland Avenue at Lonsdale Road – near Jefferson Ave. and not far from Canisius College.) The Blues recorded a double-header sweep by scores of 4-0 and 5-4. Hal Chase, Buffalo’s greatest player and baseball’s biggest scoundrel, went 5 for 7 in the twin-bill with a homer and a double.

About 5,000 turned out for those games, which were considered major league contests in hindsight. Buffalo had lost its National League team in 1885, but it hosted a Players’ League franchise in 1890 and the Federal League team in 1914-15. The Blues ended the season with a 17-game road trip, and then the whole league folded. The Federal League’s major contribution to the sport today is that Wrigley Field was built for a Federal team there back in the day.

That was it for Buffalo’s chance to see major league baseball in person – until the pandemic arrived last year. The Blue Jays were forced to move to Buffalo for part of the 2020 season because of border issues. But unless you were one of the lucky few who could figure out a way to get into Sahlen Field, it wasn’t much help. Without fans, the games were somewhat sterile experiences, in which you could hear the right fielder calling off the second baseman for fly balls – even from the stands.

Monday was different. There were again about 5,000 people on hand, as the gates were opened to spectators for the first time since 1915. It was if the Broadway cast of “Hamilton” had stumbled into Buffalo for an extended run. I’m not sure I’ve seen a crowd as involved in the game itself since the Bisons were in the midst of their marvelous era in the early 1990s.

I took some photos while I was there, and figured you might want to take a look – even if they aren’t as good as a professional’s work: 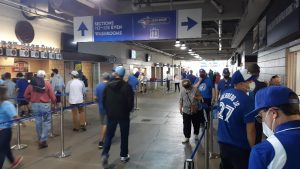 The concourse has been redone with plenty of Blue Jays colors. Meanwhile, some of the concession stands were turned into souvenir shops of Toronto items. A t-shirt commemorating the Buffalo part of the season was on sale ($40), but the rest of the merchandise was rather standard stuff. I’d bet other items connected to the special significance of this summer to the fans would sell really well if given the chance. (Also missing by the way: programs/scorecards and popcorn.) 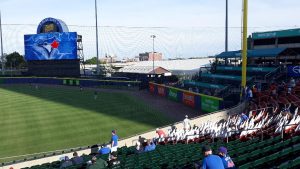 The attraction here is that the bullpens are gone from the playing field, which always looked “minor league-ish” to those in The Show. New bullpens have been built out in right-center field; the pavilion that had been there with picnic tables is gone. The temporary clubhouse for the visiting team and umpires is beyond the dugouts. 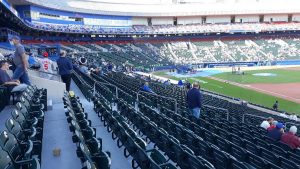 Here’s a look back at the stadium from the deep right field area. 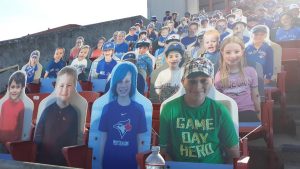 The cut-out fans were at the game. They are quiet, but loyal. No sign of musician Getty Lee of Rush, although he probably had better seats. (He was in the first row behind home plate in 2020. 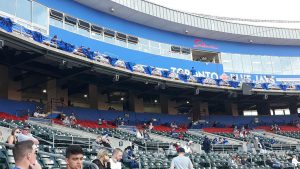 The press (OK, media) still doesn’t hang out in the press box. They have work stations high up in the lower bowl. They might have been a little cold by the time they finished work Monday night. 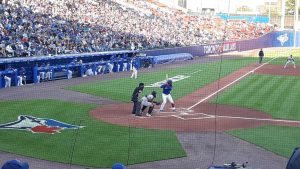 Vladimir Guerrero Jr. strikes a rather fearsome pose at the plate these days. He has been tearing up the American League so far, leading the league in homers. If Vlad’s home run hadn’t hit the netting in left field, it might have disrupted planes in a landing pattern … in Cleveland. He had his first four-hit game Monday night. 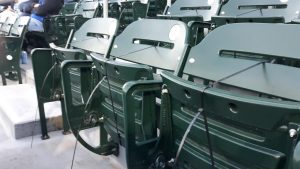 Wonder how the “socially distanced” seats worked? Zip-ties blocked intruders from sitting in unassigned seats quite nicely. It was easy to feel safe and comfortable (and I was vaccinated months ago). 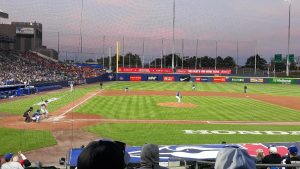 Sometimes we do get good sunsets at Sahlen Field. The pink sky over the left-field wall was a particularly nice addition to a fine night at the ballpark.

Hope you get out to see the dusks, and the games, in the coming weeks.