The Final Play: Was it the Throw or the Catch? 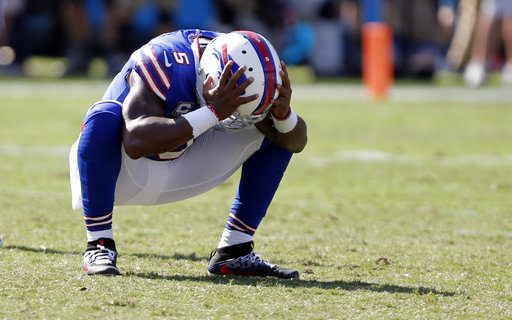 The Tyrod Taylor (5) era is over in Buffalo, and Bills fans should be happy he's gone and happy about what they got in the trade with Cleveland. (AP Photo/Bob Leverone)

The Throw or The Catch?

My knee jerk reaction was this: Zay Jones made a great attempt on a less than perfect pass from Tyrod Taylor. I thought the ball should have been thrown to the outside. After all, Jones was running an out route towards the pylon. I then watched the play over and over in slow motion to have a better understanding of what happened. Upon my review, Jones ran an out route, stumbled with the Panthers LB Thomas Davis, adjusted to the ball as it was thrown to the inside, and just missed making a great grab. I thought it was a throw that should have been to the outside, but I believe it was catchable.

But I didn’t just want to go with what I thought based upon watching the play over and over again. I could be wrong on the type of route and if it was indeed catchable. I reached out to former UB receiver Alex Neutz for his opinions on the throw, the attempted catch, and the play in general.

When asked about his initial thoughts on the play (not knee jerk reaction) Neutz said “I think it just shows his youth a little bit, I’m sure that’s a catch he makes 9 times out of 10 and you got to make it in that position there. I think he might have been overthinking about catching and scoring with so little time left, but he’ll learn from it for sure, you know he wants that one back.”

I believed the stumble with Panthers LB Thomas Davis Sr. was a factor in Jones’ route and timing, but Neutz disagreed “I don’t think the trip messed anything up. I think Taylor should have thrown it more towards the sideline, but I think he was worried about the corner having a chance to get there. All corner routes should be over your outside shoulder, not inside. Very tough to turn and catch like that.” The video evidence certainly backs up everything the former standout wideout said. But what about a quarterback’s point of view?

X’s and O’s with the QB Coach

I asked former Navy standout and pro QB Jim Kubiak the same questions I asked Neutz. The WNY QB Academy founder had a very detailed analysis of the play. “To me that is a great throw. The number two WR (Jones) is running the corner to the back pilon. That is the angle the WR should be on. The ball appears to be there and the WR is angled more toward the sideline. It is a natural movement for a young WR as they turn their heads to favor the side they turn to. If he (Jones) stays back pylon, and we are talking a foot…perhaps it’s complete.”, Kubiak said. When I asked him if timing was an issue given Jones stumbled out of his break Kubiak said, “The throw to me was on time, accurate and thrown before the break to the high angle…the WR (Jones) came out slightly flat rather than at the pilon angle.”

Pretty thorough on what Tyrod Taylor was trying to do. Kubiak knows QB’s and I trust him when he says it was a good throw. I also trust Neutz on the difficulty of making that catch and experience being a factor. It seems both agree that the route was not perfect and that experience played a factor. Now that you’ve read the opinions of players that have played the respective positions, watch the play again using their analysis as a guide and try to see what they saw.