Gabriel: Linebackers To Watch For Bills 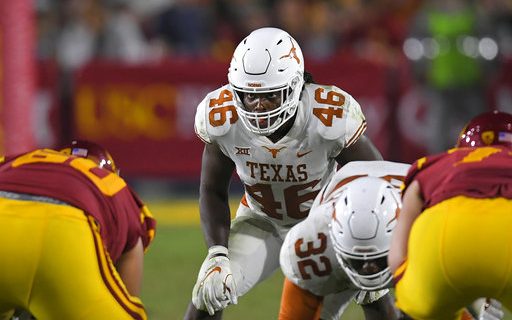 Texas linebacker Malik Jefferson (46) gets set to run a play during the second half of an NCAA college football game against Southern California, Saturday, Sept. 16, 2017, in Los Angeles. USC won 27-24 in overtime. (AP Photo/Mark J. Terrill)

When we look at the linebackers Bills Head Coach Sean McDermott had in Carolina and compare them to many of the linebackers on the Bills roster, we see a difference in the overall speed and athleticism of the groups. That said, the Bills could chose to draft a linebacker with one of their picks in the first two rounds of the 2018 NFL Draft. Of the two I profiled here, Malik Jefferson from Texas is more of a second round type while Virginia Tech’s Tremaine Edmunds will get drafted somewhere in the bottom third of the first round, which is where the Bills are selecting.

Strong Points –
Great athlete for the position has all the required physical traits needed to excel at the position. Has good play strength and is explosive. Is a downhill player in the Texas scheme and makes plays. Good in coverage, can play man or zone. Very effective as a blitzer. Reacts quickly and plays the run very well. Has good natural size and the frame to play at 240+ at the next level.

Weak Points –
More of a reactor than an anticipator. Can over pursue at times and get caught out of position. Used in an attacking manner at Texas and that also takes him out of some plays.

The Way We See It –
A true junior entering the Draft. Jefferson has been a starter since his freshman year. Has been a consistent playmaker for the Longhorns all three years. Jefferson has size, speed and athleticism to go along with a frame to carry at least another 10 pounds. Not as instinctive as some would like and he is more of a reactor than an anticipator but he still makes plays in the run and pass game. Texas usually has him attacking the line of scrimmage and he will need to learn how to play off the line. Has good hand use and can shed and is a very aggressive tackler. Shows he can play zone or man while in coverage and his athleticism shows. Very productive pass rusher. Plays inside at the college level but may be better off outside in the NFL because of his pass rush skills. Won’t have the ideal height but he will get stout enough.

Strong Points –
Tall, lean, long and well-muscled frame. Still has growth potential. Runs well and has good change of direction and body control. Plays with bend. Two year starter who is very productive with over 100 tackles each of the last two seasons. Consistent run defender who makes plays versus both the inside and outside run. Excellent range. Shows he can get rid of blockers fairly quickly. Very good in coverage, can play man against backs without a problem and is aware in zone.

Weak Points –
Not an anticipator but more of a reactor. You can get away with that in college but not the NFL. May be too tall to play inside at the NFL level. Can get tall at times when taking on blocks. Not as mush pass rush production as a guy with his physical traits should have.

Summation –
A true junior entering the Draft. A different type of player in that we don’t often see inside linebackers who are close to 6’5. Very productive college player but he is more of a reactor than an anticipator. In the NFL instincts matter at the LBer position. While he can get tall at times, he still can use his hands and shed. Better in pursuit than with runs right at him. Needs to make a few more plays at or near the LOS. Very good coverage guy in that he gets depth with his drop and can play man. Plants and closes on the ball quickly. Not used a lot as a blitzer/pass rusher and needs to develop his pass rush technique. Overall this is a very good prospect who is not quite there yet. With his frame, he may be better off outside but if he plays there he needs to improve his pass rush skills. Has a lot of upside. He will be graded differently by each club depending on their profile for the position.