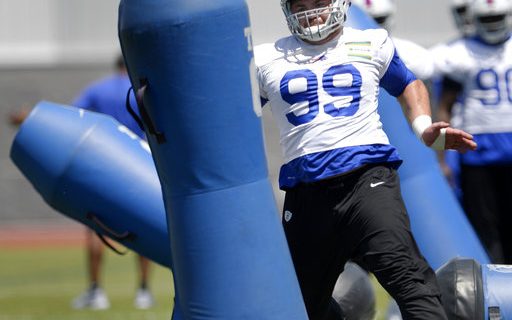 When Sean McDermott came in last year as the Head Coach of the Buffalo Bills, one of the first things he did was change the defensive scheme that was used previously.  It’s now the attacking 4-3 that McDermott used so successfully for years in Carolina. While the defense showed improvement from 2016 to 2017, the defensive line as a whole did not have the production that McDermott had hoped for.

McDermott felt he needed more talent across the front and so the first thing the Bills did once free agency opened was sign Star Lotulelei.  He was one of the leaders of McDermott D-Line in Carolina. Lotulelei will line up next to Kyle Williams, who is back for what is thought to be his final season in the NFL. Williams may be 35 but his play hasn’t really fallen off.

The Bills also drafted Stanford defensive tackle Harrison Phillips, who has a non-stop motor and can create inside pressure on passing downs. The other depth inside will come from returnee Adolphus Washington and free agent acquisition Tenny Palepoi. When McDermott was in Carolina the interior defensive line was at its best when he could utilize a four man rotation. The Bills now have the talent to do that inside.

Buffalo also added a top player at defensive end with the addition of former Washington edge player Trent Murphy. Murphy was listed as an outside linebacker in Washington but he played in a 3-4 scheme and so he was mainly a pass rusher, which is what he will be doing in Buffalo.

Murphy missed all of 2017 with an ACL injury but he had 9.0 sacks in 2016. The Bills hope he can show that same type of play as they drastically need more sack production from the line.
Across from Murphy will be either Jerry Hughes or former first round pick Shaq Lawson. Since coming to Buffalo in 2013, Hughes has been the Bills most consistent pass rusher with a total of 34.5 sacks in those 5 seasons. He had his lowest sack production last year with only 4.0 and McDermott hopes to see improvement in 2018.

Lawson, who was the Bills first round pick in 2016, has been a bit of a disappointment. He had a shoulder injury problem his rookie year and then last year produced only 4.0 sacks. If he wants to remain a big part of the Bills defense, he has to at least double his production.

The other depth outside comes from Eddie Yarbrough, Terrence Fede and Owa Odighizuwa. Yarbrough showed flashes last year as a first year player but was better versus the run than as a pass rusher. Fede, who was with the Dolphins, is more of a special teams phenom but he has the traits to be a solid outside player. Odighizuwa was originally with the Giants and played well as a rookie before walking away from the game in 2017. He has to prove he is committed to being an NFL player.

Overall, the level of talent along the defensive line has certainly improved but that improved talent has to show itself on the field. The Bills only got 19 sacks form the defensive line last year. For the defensive line to play the way McDermott wants it to that production has to nearly double this year. When pads come on in another 5 weeks at training camp we will begin to see if that is going to happen.