Gabriel: What Should Bills Should Do in First Round? 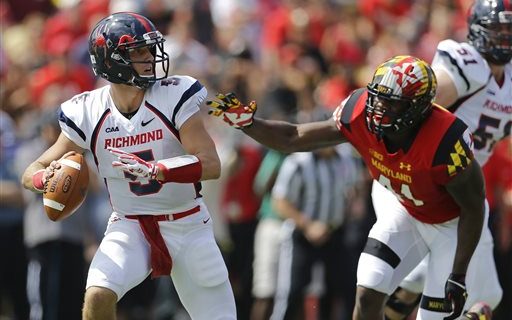 Richmond quarterback Kyle Lauletta, left, could be the best option at quarterback for the Buffalo Bills in this year's NFL Draft. (AP Photo/Patrick Semansky)

Free agency starts a week from today in the NFL and while I’m sure the Buffalo Bills will be involved in some capacity, I highly doubt they will be “players” at least in the initial wave of signings. Why? They just don’t have the cap space to afford to go after the top players. They will be much better served getting players in the second wave because they won’t cost as much and they will be the type who can add solid depth to the Bills roster.

The Bills already got a head start in free agency, signing two players recently and both be players who can help the Bills. The first was corner Vontae Davis who was with the Colts the last six seasons.  Yesterday it was announced the Bills signed running back Chris Ivory, who was recently released by Jacksonville. Both players were able to be signed now because they were “street” free agents versus unrestricted free agents.

We can expect Davis to come in and be a starter for the Bills while Ivory will be the backup to LeSean McCoy.  His running style will act as a compliment to McCoy.

After those two signings, the Bills don’t have a lot of cap space left in which to go after other free agents as they only have about $25 Million left to spend. Some of that has to be used to sign the players drafted next month.

What hurts the Bills in 2018 is they are carrying over $18 Million in dead money from previous contracts (Marcell Dareus, Aaron Williams) who are no longer with the team. This should be the last year that the Bills have that much dead money figured into their cap space.

Draft Is The Key

With the Bills not expected to be big players in free agency, it means they have to use the Draft as their primary area to acquire players in 2018. As of today, the Bills have eight picks in the April Draft. They have two picks in each of the first and second rounds as well as one pick in rounds three and four. They close out the Draft with two selections in round five. They do not have any picks in rounds six and seven.

While there has been a lot of speculation that the Bills will try and move up in the Draft, I just can’t see it. They need to acquire quality players, not give up assets to get one player. If anything, it wouldn’t surprise me if the Bills trade down with the number 22 pick in the first round to pick up a few extra selections.

The 2018 Draft is not what I would call a great Draft. There is no consensus number one player and I don’t think you could get teams to agree on who the top 10 players are. Actually a team like the Bills are better off selecting in the 20’s than they would be in the teens or top 10. The chance of getting a top player is just as good at 21 as it is at say, 14 or 15. That is just the way this draft will fall.

Staying at 21 and 22, the Bills could be looking at a corner (Jaire Alexander), a linebacker (Rashaan Evans), an offensive lineman (Mike McGlinchey, Connor Williams, Will Hernandez) or maybe a wide receiver (Courtland Sutton. James Washington, Dante Pettis).

Obviously there is a need at the quarterback position and if the Bills hold pat and wait for one in the early 20’s they could be looking at guys like Mason Rudolph or Lamar Jackson. Maybe one of the top four guys fall as that is not inconceivable. They could also say they will wait for the quarterback in round two and get a guy like Kyle Lauletta or possibly Jackson falls that far. Nothing is off the table at this points as clubs are still figuring out how to stack their boards. This will continue for another four to five weeks.

There will be a lot of speculation as to what the Bills may or may not do and that is what makes this time of the year so fun. But looking at the cap space the Bills have and the needs they have I just don’t think that moving up in the Draft is a wise decision.