Gabriel: Where Is This Bills Season Going? 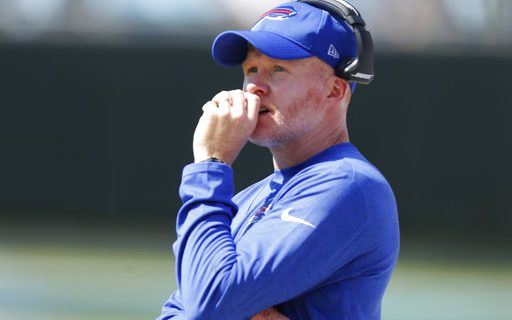 Buffalo Bills head coach Sean McDermott will need to get his team focused, or this season will get even worse. (AP Photo/Jason E. Miczek)

I am not normally a negative person but after watching the tape of the Bills blowout loss to the Indianapolis Colts, I can’t help but be. The effort put out by many of the Bills players was just not acceptable for a team trying to win games.

The first sign of that lack of effort was after the Colts had a 6-0 lead. Buffalo drove the ball down to the Colts 22. On first down new quarterback Derek Anderson hit Charles Clay on a crossing route at the Colts 12 and Clay proceeds to fumble the ball. I learned a long time ago that fumbles are not physical. They are mental. That play was a lack of mental toughness on Clay’s part.

On that next Colts possession the defense totally let down including a blown coverage on Marlon Mack’s 29 yard touchdown reception. It was just a short swing pass and there wasn’t a Bills defender anywhere close to Mack. Another lack of mental toughness.

A few series later, the Bills were driving again and get into Indianapolis territory. The Bills had a first and five at the Colts 43 and on that play Anderson threw to Kelvin Benjamin on a crossing route. Yes, Benjamin was double covered but he showed no effort in trying to get to the ball and Mike Mitchell of the Colts easily intercepted. From that point on, the effort by the Bills team was almost nill.

The Colts feel the strong point of their team is the offensive line and that line totally dominated the line of scrimmage in the second half. The Colts went on to have an almost seven minute time if possession advantage in the game. That stat tells us how the line dominated.

Supposed to Win in Indy

Looking at the schedule, the game the Bills were supposed to be in was the Colts game. Going into the game, the Colts were 1-5 and had given up 42 points to the Jets who have a rookie quarterback the previous week. I don’t care that the Bills were playing with a new quarterback, they should have scored more than five points on a very average Colts defense. Instead, they turn the ball over five times. That’s not acceptable!

The next two weeks the Bills are at home against Division rival New England on Monday night and then the vastly improved Chicago Bears. The Patriots are averaging close to 40 points per game over the last four games and Josh Gordon, who is as talented a receiver as there is in the NFL, is just starting to feel comfortable in the New England offense.

The Bears have lost two close games in the last two weeks but they are also putting up a lot of points. If the Bills defense gave up 37 points to the Cots, what is going to happen against the Patriots and Bears?

This is gut check time for Seam McDermott and the whole Bills team. They can put up a fight and try to be in these two upcoming games or they can pack it in. These games will tell us a lot about how the Bills season will turn out. Yes, they lack the overall talent of many of their opponents but if they execute the game plan and play hard they should have a chance. The loss to the Colts was by 32 points, if they play with equal type effort against the Pats and Bears even though the games are at home, they could lose by far more than 32!