Gabriel: Why Are Bills Working Out Sam Darnold? 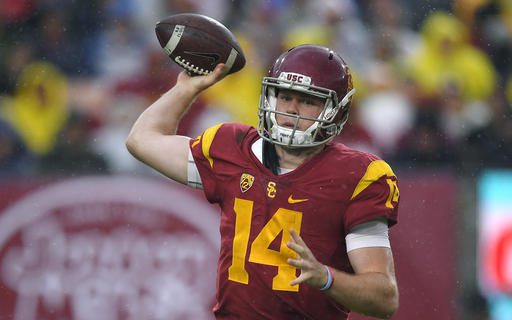 Presently the Buffalo Bills hold the 12th pick in the first round of the 2018 NFL Draft. The Bills are also flying out to Los Angeles to meet and workout USC quarterback Sam Darnold on Friday.  Being that Darnold will go in the top four picks, why would the Bills spend the time and money for this workout?

The answer is simple, the Buffalo Bills would like to move up to be in position to draft one of the so-called elite quarterbacks in this Draft. With Darnold being one of those quarterbacks and possibly the best quarterback in this Draft, the Bills need to have any and all questions they have on Darnold answered.

Reality is for the Bills to have a shot at Darnold, the Cleveland Browns have to pass on him with the first overall pick and the New York Giants who have the second pick have to be willing to make a deal with the Bills so that the Bills end up with that second pick.

Of course if Cleveland selects Darnold at number one then the Bills wasted their time. As I write this, I have been told that Cleveland has not made up their mind as to who to select at one. They are debating between two quarterbacks, Darnold being one and the other is Wyoming’s Josh Allen. Allen of course has the big arm and is very mobile but he has problems with accuracy. Darnold on the other hand is much further advanced but he has some negative also.

The first negative that jumps out on Darnold is that he didn’t play as well in 2017 as he did in 2016. His completion percentage dropped by over four points and he turned the ball over more between interceptions and fumbles. Granted, his supporting cast wasn’t as good but he was also more experienced so he should have shown improvement.

When you look at his mechanics, he does not a conventional throwing motion. He has a semi-sidearm release with a long delivery. These can be corrected but it takes time. His decision making also can be questioned and that was one of the reasons for his increased number of turnovers.

What the Bills hope to accomplish with this meeting and workout is to get to know Sam Darnold the person better and to learn how he thinks on the field. As I have written before here, part of a private workout is extensive classroom work. In the classroom, the Bills coaches will have Darnold break down some USC plays and have him relate to them just what was going on during certain plays. It is here that the coaches will get a good understanding of Darnold’s thought pattern when he is on the field and his overall knowledge of offensive football and concepts.

Once done with that, the Bills may install some of their own offense to see how quickly Sam can pick up and understand what he is being asked to do. Often in these sessions, the coach will ask the player to give back to him everything that was taught in the previous 15 to 20 minutes. If Darnold is a quick learner, he should be able to give back to the coach everything he was taught about some certain plays.

When the Bills coaches and staff are done with the classroom work, they will go out on the field with Darnold for the workout portion. Part of this exercise is just to see how he can setup and throw with accuracy. Another part is to see if he can take what he just learned in the classroom and apply it on the field.

A final part of the process is just to see if Darnold and the Bills coaches are in sync with each other. Do they like each other and are their personalities compatible? After spending hours with Darnold, the Bills coaching staff and decision makers should have a strong idea if they in fact want him to be the Bills quarterback. If the answer is yes then it’s a matter of hoping that the Browns don’t draft him and the Bills are able to put a deal together with the Giants. If both things don’t happen, then it was a waste of time for the Bills but also a useful waste of time as they have done all their due diligence on the just in case.