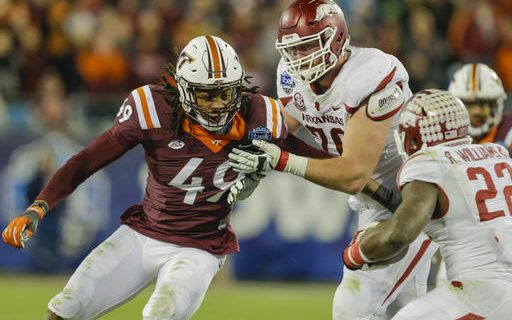 Strong Points –Tall, lean, long and well-muscled frame. Still has growth potential. Runs well and has good change of direction and body control. Plays with bend. Two year starter who is very productive with over 100 tackles each of the last two seasons. Consistent run defender who makes plays versus both the inside and outside run. Excellent range. Shows he can get rid of blockers fairly quickly. Very good in coverage, can play man against backs without a problem, can get depth very quickly in zone. Will be a 20 year old rookie.

Weak Points –Not an anticipator but more of a reactor. He can get away with that in college but not the NFL. May be too tall to play inside at the NFL level. Can get tall at times when taking on blocks. Not as much pass rush production as a guy with his physical traits should have. Needs to develop pass rush moves.

Summation –A true junior entering the Draft. A different type of player in that we don’t often see inside linebackers who are close to 6’5. Very productive college player but he is more of a reactor than an anticipator. In the NFL instincts matter at the LBer position. While he can get tall at times, he still can use his hands and shed. Better in pursuit than with runs right at him. Needs to make a few more plays at or near the LOS. Very good coverage guy in that he gets depth with his drop and can play man. Plants and closes on the ball quickly. Not used a lot as a blitzer/pass rusher and needs to develop his pass rush technique. Overall this is a very good prospect who is not quite there yet. With his frame, he may be better off outside but if he plays there he needs to improve his pass rush skills. Has a lot of upside. He will be graded differently by each club depending on their profile for the position. With his size and athleticism he has some Urlacher to him (but he’s not Urlacher). Can control the middle of the field in zone like Brian was able to do. I’m not as high as others on this player because he doesn’t have top instincts but at his age they will get better,