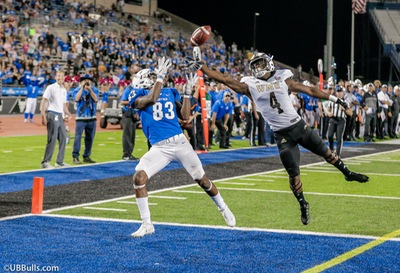 Here is how I would address the Bills most pressing needs at this point in the off-season. This is most certainly going to change with free agency. But at this point the Bills have five picks in the first four rounds. One pick each in rounds one through three and two picks in the fourth round.

I would try to trade down in the first round for an extra second round pick. I believe there are a few teams that might be interested in trading up for a quarterback at this point. The Dolphins and Redskins are just behind the Bills and I believe would be interested at this point in possible moving up. That could change as well with free agency if they address a QB there.

So for this article I will play it straight and just draft the five picks the Bills currently hold.

I believe Ferrell is the best 4-3 defensive end in the draft. The Bills have a huge concern on the horizon. Both Shaq Lawson and Jerry Hughes are in the final year of their contract. The Bills could lose both next year. Lawson because they want to and Hughes because he might ask for too much money for a man his age. Ferrell is good against the run and pass. Last year he had 11.5 sacks for the national champs.
You need to get good pass rushers in the top of the draft. I see the Bills getting one in the first round.

Yodny Cajuste: West Virginia OT
Round two is where I see the Bills addressing the tackle situation. One good tackle will still be there for the Bills in Round two. I was hoping it would be Dalton Risner of Kansas State but now I feel he will be gone by the time the Bills pick. Cajuste could play right or left tackle. He has the ideal size and length for a tackle in the NFL. I love his power off of the ball. He has a mean streak in his game too that I enjoy. I would have Dion Dawkins and Cajuste battle for the left tackle spot and the loser would play right tackle.

At this point Johnson is projected to go right around the Bills pick in round three. That could change if he runs fast in his pro day or at the combine. But at this point I think he would be a steal for the Bills here. For two years I’ve been saying he’s the best receiver in Buffalo. Now is his chance to prove it. Injuries slowed him down a little in his senior season. That’s fine because for me it’s a bargain to get him here. From his first game against Minnesota I fell in love with him. He has a great ability to run after the catch. His hands are solid. I’ve seen him get behind enough receivers to believe when healthy his speed is good enough. I see very few weaknesses in his game.

The Bills need to address the running back situation in the draft. Even with Shady McCoy coming back the Bills need to find his replacement. The running backs are so deep in the draft I feel you can find a good one in round four. Singletary is my pick.
Singletary has rushed for over 4200 yards in his three years with the Owls. He displays some rare elusive traits that McCoy shows. In that sense I believe he is a poor man’s Shady McCoy. He doesn’t shy from contact either. He’s a tough back that can carry the load.

This is a deep class for tight ends. I believe the Bills can get a good one here at the end of the fourth round. I’ll go with Sternberger because I like his upside as a pass catcher. He needs to improve on his run blocking. The Bills might want to beef him up a little. His hands and athleticism are a rare commodity. The Bills have tended to stay away from one-year wonders but I feel if he had gone back to A&M he would have been drafted much higher next year. I see good value with him in the fourth round this year.