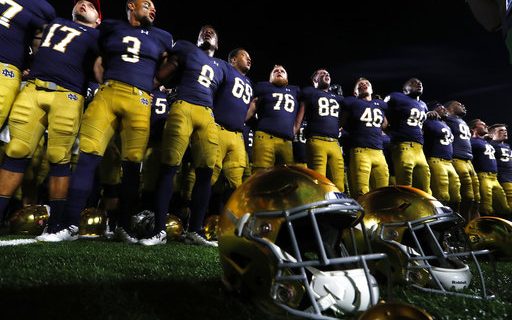 Each week, we’ll recap the college football weekend with an emphasis on interesting games, great performances, big upsets and a local focus on the UB Bulls.

Tyree Jackson throws five first half touchdowns and six on the night as the Bulls roll to a 48-10 win. UB led 20-0 after the first quarter and 34-3 at halftime. This is exactly what you would expect the team to do against an inferior opponent. Tyree had two NFL type throws for touchdowns; one in the corner of the endzone to Anthony Johnson and the other to KJ Osborn. Next up for UB is at Temple next Saturday. This was supposed to be one of the tougher games on the schedule. Villanova’s 19-17 upset of Temple on Saturday may say otherwise. This was no fluke as Temple was outgained 405 yards to 251 in the game.

Washington blew this game with too many redzone miscues. The Huskies missed a field goal and had a TD taken back by a penalty called for offensive interference. Jake Browning also fumbled away an option pitch inside the five. I came away with a positive feel for both of these teams. Both still are in the hunt to be in the college football playoff when it’s all said and done.

11 years to the day that Appalachian State had their big upset over Michigan was this game. Penn State barely survives in Happy Valley. The Lions tied the game with 42 seconds to go on a Trace McSorley 15 yard touchdown pass. Miles Sanders ran over from four yards out in OT to give PSU a seven-point lead. Amani Oruwaiye sealed the win with an interception of a Zac Thomas pass in the endzone.

The heat on Jim Harbaugh to win a big game gets hotter after this one. Harbaugh was supposed to be a coach that can get the best out of a quarterback. That hasn’t been the case so far at Michigan. Shea Patterson was awful Saturday. Michigan scored seven points on a kick-off return for a touchdown, otherwise they had 10 offensive points. The Wolverines had a chance to tie late but Patterson fumbled the ball in pressure and Notre Dame recovered to end the game.

*Chip Kelly loses as a 10-point favorite his first game at home to Cincinnati. UCLA falls 26-17.

*Alabama looks dominant as the number one team in the nation by destroying Louisville 51-14.

*Look out for Cole McDonald and Hawaii. McDonald throws 6 touchdown passes in a 59-41 win over Navy. Hawaii looks good as they improve to 2-0.

*Two future UB opponents struggle. Army won 10 games last year but have a new QB. Army was destroyed by Duke on Friday 34-14.  Ohio is the main competitor to the Bulls in the MAC East. Ohio barely got past Howard at home. The Bobcats pull out a 38-32 win. Defense is a major concern for Ohio, they lost four key starters from last year on the defensive side of the ball.

Michigan State’s high hopes for a season almost came crashing down in Week 1 at home to Utah State. The Aggies used a hurry-up, no huddle Mike Leach-type of offense to move the ball on the Spartans. Felton Davis made a nice 31 yard catch to set-up the go ahead touchdown for Sparty. Still the sloppy performance by Michigan State was not the way they expected to start the season.

Rocky Long the defensive mastermind for San Diego State decided he wasn’t going to let Bryce Love beat him. Love was held to just 29 yards on 18 carries. Problem was that JJ Arcega-Whiteside had a career night. Arcega-White scored three long touchdowns and finished the night with 226 yards receiving.