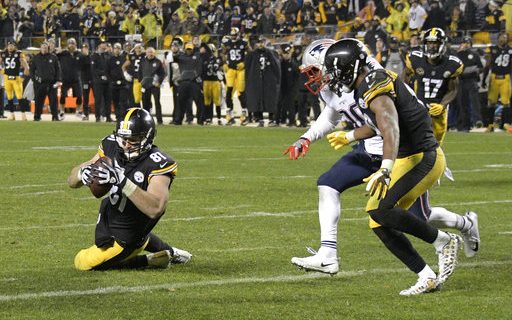 Pittsburgh Steelers tight end Jesse James (81) has a knee down before crossing the goal line with a pass from quarterback Ben Roethlisberger during the second half of an NFL football game against the New England Patriots in Pittsburgh, Sunday, Dec. 17, 2017. The Patriots won 27-24. (AP Photo/Don Wright)

–Tyrod’s First Half. Taylor looked great in his return from injury, in the first half anyway. He spread the ball around, and used his legs as needed to create time and run for a TD.

-LeSean McCoy at 10K. He is now one only 30 RB’s in NFL history to gain 10,000 yards or more. That is rare company, and should be celebrated. I was ready to move on from him earlier this season, but his leadership the past two weeks has changed my mind on that. I believe he will finish his career with over 12,000 yards and make the Hall of Fame, and join the 2 other Bills that have surpassed 10K, Thurman and O.J.

-McDermott Went For It. The Bills didn’t punt inside Dolphins territory, proving they’re not tone deaf………until they punted in the 4th.

-Jack Trick. Jack Eichel recorded his first NHL Hat Trick (nicely worded by Dunleavy) last Friday against the Carolina Hurricanes. His 2nd and 3rd goals came within 10 seconds of each other to tie the game. It was a display of a player worth $80 million. If he’s going to lead the Sabres out of the NHL’s basement, he has to played inspired hockey the way he did on Friday.

-Not Putting the Dolphins Away. The Bills had chance to put the game away with another TD, but had to settle for a field goal. It kept the Dolphins in the game and the onside kick made it even more interesting. Good teams put teams away.

-Defend Our Dirt. That is the slogan Sean McDermott uses as a rallying cry for his team and fans. I get it, but I think it’s weak. First, the Bills play on artificial turf, so it doesn’t make literal sense. Secondly, it’s simple alliteration, and PSE has enough marketing wizards to come up with something better. Heck, even Defend Our Turf is better. It sounds tougher, more territorial, and provides more options with D.O.T. DOD is a DUD.

–Losing in OT. The Sabres can’t seem to win in extra time. Their star forwards can’t score on breakaways, and they are a mess in their own end 4 on 4.

-Announcers. Not for the reasons that you think. I think it’s great Beth Mowins got the nod on another game and had a real partner in Jay Feely rather than the Rex Ryan clown show. What I didn’t like, aside from the vanishing and reappearing accent, was the continuous references to the cold. You would have thought the game was being played at the North Pole if you didn’t know any better. They also work in a press box, not open air booth.

–Jay Cutler. Dude looked disinterested and horrible at times vs. the Bills. The worst coming after they recovered the onside kick. The throw that was picked off by Tre’ White was pathetic at best.

–Jesse James Got Robbed. The Steelers tight end scored a touchdown to beat the Patriots, except the NFL negated the obvious score because of their catch criteria. You have to take the ball to the ground with control for it to be a catch. Absolute garbage! Anyone who has ever played football knows that was a catch. The NFL should be embarrassed and ashamed. The competition committee has to change the catch rule, because the current rule is void of common sense.

-The Following Play. I like that Big Ben was trying to win the game, but panicking and trying to force a throw in traffic was a terrible choice. TD or Tie game, and take your chances in OT.