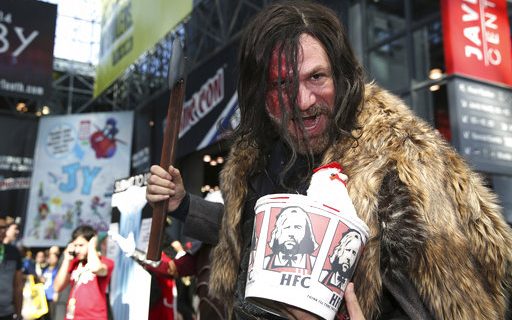 An attendee poses for a photo dressed as Sandor 'The Hound' Clegane from the "Game of Thrones" series during New York Comic Con, Friday, Oct. 6, 2017. The event runs through Oct. 8 at the Javits Center, Madison Square Garden, and the Hammerstein Ballroom. (AP Photo/Steve Luciano)

Each week I like to highlight what has been good, bad, and ugly in the Buffalo sports world. On occasion, I’ll even throw in some items from the sports world in general. This will be one of those weeks.

-NFL’s #mycleatsmyclause initiative. Players have causes that are near and dear to them, and the NFL gives each player the chance to break the uniform rules to support these worthy causes. The more charity work and giving, the better.

-Sabres and Make-A-Wish. The Sabres, Make-a-Wish, and Jack Eichel helped young Ethan Georger’s wish come true to meet Jack and play a video hockey game with him. The team did even more with the visit (as they always do) to make Ethan and his family have a day they will never forget.  I know the Georger family, and this wish fulfillment was greatly appreciated for Ethan, his siblings, and his parents. Well done Sabres.

-College Basketball. We have some excellent teams in WNY, with UB and St. Bonaventure thinking Big Dance again this season. The Bonnies pulled off a big win at UB on Saturday, while UB flexed it’s muscle a few days earlier against Niagara and their high-scoring duo of Khalil Dukes and Matt Scott. Be sure to catch these teams (Canisius too) on their home floors this season.

-Tiger Woods. His return has the golf world abuzz. We have seen this before, but this time it feels different. Tiger seems to have more hope. He will need to play some normal PGA Tour events that have a full field and a cut, but this was a better than expected start to his latest comeback.

-None Buffalo. You can’t win if you can’t score. In three game this weekend, the Bills and Sabres scored a combined total of 4 points.  The Bills issue lies with the QB. The Sabres issues are deeper, and quite puzzling. The forwards were supposed to be a strength of the team, but they look as weak as the defense(which doesn’t have a goal from a blue liner this year). Okposo, O’Reilly, and Reinhart are the players that really need to start lighting the lamp. I’m not sure an empty netter would go in now.

–Coach Speak. This will never go away, but it’s insulting at times. I’ll give you an example: when Sean McDermott says “…we have to learn from this…”. A team can’t learn talent. But a coach can learn a few things from a game. In particular, what he can challenge and what he can’t.

-Challenges. What was Sean McDermott challenging on the Brady incompletion in the first half? It didn’t make sense and was a waste of a timeout. A good use of a timeout would have been midway through the third quarter on the horrible spot that gave the Pats a first down. I know the Patriots hurried to the line of scrimmage to snap ball, but you can’t let that be an excuse to allow that to happen. The spot was questionable from the very end of the play, and the fact the team coached by the best guy in the league is rushing to the ball should set off the alarm. McDermott was not completely powerless. He could have called a timeout. A player on the field could have called a timeout. A field goal would have kept the Bills in the game. Fans and the Bills can blame the officials all they want, but the other sideline was on top of it.

–The Interception. A creative drive all the way down the field ends in an interception, erasing the chance for the Bills to grab the lead on the Patriots. When you’re trying to defeat a champion, you can’t afford any mistakes, especially when you have a chance to score.

–The Officiating. I gave Sean McDermott a “bad” for his video reviews or lack off, but Gene Steratore’s crew did not have a good game. The third quarter spot that gave the Pats a first down was terrible, and the result of the Gronk thing ended up hurting the Bills. How Gronk was not ejected is baffling.

–The Gronk Shot. What the hell was that Gronk? You got beat on a play (there was some grabbing), so you have to pull off a cheap shot. That is a dangerous play, and he should be suspended. The intent was to injure Tre’Davious White, and he succeeded.

–The Sabres Season. There is no other way to describe this season, it’s ugly. The team knows they’re out of the playoff picture (not mathematically, but in reality). GM Jason Botterill has a tall task trying to reshape the roster now with the some bloated contracts, and players that seem to have lost their touch. Fans are becoming apathetic, which is a very bad thing for business.