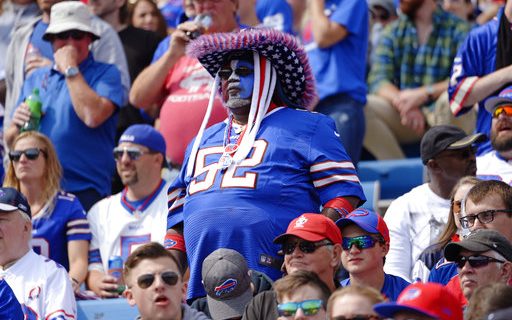 Bills fans have arrived. The rest of the football world is paying attention. Jeff Wozer has some examples. (AP Photo/Adrian Kraus)

The Good, The Bad and The Hound

Each week (okay, I missed last week) I will share what I think were the…I really don’t need to explain this, do I? No. Enjoy, and I look forward to your comments.

Bills in First Place. It has been 1000 days (that’s what Paul Peck told me after the game) since the Bills were all alone in first place in the AFC East. I’m no math wizard, but that’s nearly 3 years ago. Who the hell was the QB and coach then? Doug Marrone and EJ Manuel is your answer. Do you remember the opening win in OT vs the Bears at Soldier field, and then the home opening win against Miami? It really wasn’t that long ago, but it feels like forever. That team would actually go on to finish 9-7, with the 9th win being a meaningless win to almost everyone, but Marrone. But fans should enjoy this and get carried away if they’d like. They deserve it!

Targeting Clay. The trade of Sammy Watkins took away Tyrod Taylor’s favorite target. Offensive Coordinator Rick Dennison seemed determine to make Charles Clay the focal point of the passing game, with 9 targets vs the Jets. Clay only caught 4, but the fact that his number was called more often is a good sign.

Shady Acres. LeSean McCoy covered a lot of ground against the Jets with 110 yards rushing and 49 receiving. It was the performance everyone expected out of the Bills top offensive player (I think I was supposed to write weapon instead of player, but everyone does that). The only downside is he didn’t score a touchdown (full disclosure: I have him on my fantasy team).

Ramon Humber. I think I’ll get the nameplate on the Arthur Moats jersey changed to Humber after his 12 solo tackle performance. Of Course, Moats did sign the number, so…….

Tyrod Taylor’s Completion Percentage. Taylor played a fine game, but his missed on several passes (not all his fault), completing 16 of 28 attempts. That is a 57% completion rate, and that needs to improve.

Clay to Stone. If Charles Clay is going to be targeted as much as he was in the game, he has to catch the football!

The Jets. That is a bad football team.

Opening Drive. It was actually beautiful, but the finish to it was not. I don’t have an issue with the play call on first and goal from the 5. it was the throw that was ugly. It was high and put Charles Clay in a vulnerable spot. He tipped a very tough pass and took a big hit while the pass was picked off. It was a situation when the Bills used to isolate Sammy Watkins to make a play for the ball.

The Jets Punt. What the heck was Todd Bowles thinking? The Jets are down 21-12 with roughly 4:00 minutes to play and he decides to punt. That was not the call of a coach trying to win a game. Everyone watching that game knew they had to go for that, except the coach. Just terrible.

The Injury Tent. I understand injuries are a huge factor in games, and you’d like to conceal as much as you can from your opponent. I also get that it’s more convenient than bringing a player into the locker room. It just looks silly.