Good, Bad, and The Hound Bills lose to Bengals 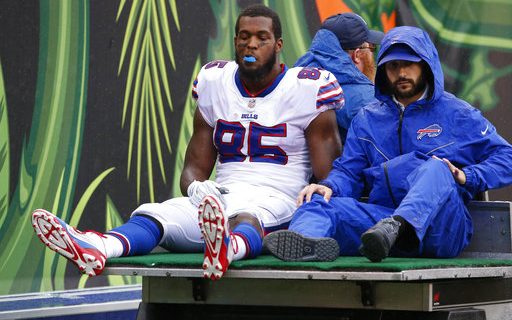 Buffalo Bills tight end Charles Clay (85) is carted off the field in the first half of an NFL football game against the Cincinnati Bengals, Sunday, Oct. 8, 2017, in Cincinnati. (AP Photo/Gary Landers)

– TD throw to Tate. Tyrod Taylor made a great throw to Brandon Tate for a TD. It was a big league throw and catch. It’s a big maddening that we don’t see more of it.

–Takeaways. The defense continues to do a great job of taking the football away from the other team. The safeties in particular, as Jordan Poyer had 2 (interception and fumble) and Micah Hyde had a pick.

–Nick O’Leary. In the absence of Charles Clay, The Golden Bear’s grandson was a good receiving option for Taylor over the middle. Too bad he couldn’t finish the game due to injury.

–Marcell Dareus made a play—A sack on Andy Dalton.

–Drew Anderson. The UB QB (hard to call him a backup now) threw for just under 600 yards and 7 TD’s with 0 interceptions in the 71-68 7OT loss to WMU. A game for the ages. Oh yeah, he ran for a touchdown too! Good luck Lance Leipold on figuring out what to do when Tyree Jackson is healthy enough to return (good problem to have).

–Injuries. Good thing the Bills have a bye week because injuries have mounted. Losing Clay was a big blow in the game.

–Field Goals. Its great they have a reliable kicker in Stephen Hauschka, but they need to start having him kick extra points instead of field goals.

–Roughing Passer call on Jerry Hughes-It was a bad call. Perhaps a reputation call against Hughes for all of his past personal fouls.

–Get rid of the ball! Tyrod Taylor taking the sack on the first play of the last possession was a no-no. He had plenty of time to survey the field and get rid of it. Instead he took a costly sack. He needed to throw that one away.

–Mabin Pick Potential. The ball hit Greg Mabin right in the chest on Andy Dalton’s final pass attempt of the game. It should have been intercepted, and would have kept a field goal in play for the Bills on their final possession for a chance to win.

–Charles Clay getting hurt. Without Jordan Matthews, Clay was the only reliable and consistent target that could get down the field.

-Zay Jones. Enough is enough for the rookie. Catch the ball! Who can Tyrod Taylor rely on?

–Playing 7 OT’s. This in reference to UB’s loss to Western Michigan. It was a game for the ages, but that is asking too much of college athletes to play that much without a break. I would vote for a tie after 3 overtimes. UB will not get any credit at all for that game as it was a loss. Let’s hope it doesn’t affect bowl bid possibilities.

–The Snowman. The commercial for this crime thriller film that ran during the Bills game can’t be a real movie. It actually is and I was told on Twitter that it’s based upon a pretty good book series.  I did some digging and found out it’s not only legit, but almost had Martin Scorsese as the director. It’s based on the booked of the same name by author Jo Nesbo, and the screenplay version was inspired by the success of The Girl With the Dragon Tattoo movie. Okay,I will see it, but the image of the snowman at the end of the trailer was a little goofy.

–Sabres vs Islanders. A clunker to be sure. The team showed promise on opening night, but the two shorties in Brooklyn (sounds like a Beastie Boys song) blew the game open. 4-0 is too tough to comeback from even with Evander Kane netting a pair of shorthanded goals for the Sabres. We’ll see if the team can discover a win on Columbus Day.

–Odell Beckham Jr Injury. It looked ugly immediately. The replay wasn’t Theisman like, but you knew there had to be a fracture in there somewhere. Ouch.