The Good, Bad, and The Hound: Bills win over Atlanta 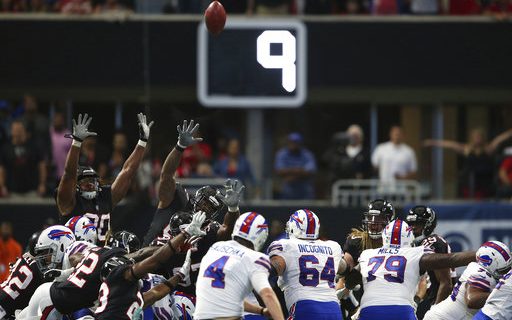 Buffalo Bills kicker Stephen Hauschka (4) kicks a field goal against the Atlanta Falcons during the second half of an NFL football game, Sunday, Oct. 1, 2017, in Atlanta. The Buffalo Bills won 23-17. (AP Photo/John Bazemore)

–Bills Defense. What if this unit played like this last year? Doesn’t matter because that is history. Sure, they finally gave up a passing touchdown, but scored one themselves when Tre-Davious White recovered a fumble (looked like a pass to me) and returned it for a touchdown. Another pick went their way in the fourth quarter, and they stopped the Falcons at the end of the game. This defense is for real, and Jerry Hughes is the best player on that unit.

–Tyrod Taylor to Charles Clay. The connection on the broken play in the first half that set up the touchdown was the start of a solid day for QB and TE. That play went for 44 yards, setting up a precise TD pass to Matthews on the next play. Clay would end up with 5 catches for 114 yards to lead the Bills in that category.

-Stephen Hauschka. While I hated the 24 yarder (I wanted the Bills to go for it at the goal line), What’s to hate about 56 and 55 yard field goals? He made them look easy, in huge moments.

–Bills Mafia. It was cool to see all of the Bills fans on social media in Atlanta for the game. Transplants and direct flights can be thanked for that.

Bad (Not much here this week!)

–Tyrod Taylor to Zay Jones. Those two aren’t even reading the same book, let alone on the same page. I think it is more Jones than Taylor despite a few less than perfect throws. It’s not easy being a rookie in the NFL.

-Injuries. For both teams. Julio Jones and Muhammed Sanu both missed the second half and there is no doubt that was a factor. The Bills suffered two losses in the secondary, with Gaines being biggest loss. On offense, Jordan Matthews, according to reports, could miss a month with a thumb injury, and Mike Tolbert was banged up. Let’s not forget LeSean McCoy leaves the field each week holding his right wrist.

–Uniforms. I do not like the blue pants and white jersey look. I didn’t like it in the early 80’s and I don’t like it now. I like all blue, blue jersey and white pants, and the all white. The throwback all white are the best.

–Loose carpet in the dome. Tyrod Taylor slipped running out of bounds early in the second quarter on a loose piece of turf covering the concrete in the corner. He was lucky it wasn’t worse. I guess $1.6 Billion doesn’t by what it used to.

–The Brady Rule. So that isn’t in effect anymore? The hit by Hughes on Matt Ryan sure looked like a forward pass, but the ruling on the field stood as a fumble.  It was hard to believe the Bills got the break, but it happened.

–The Harmonica. I was going to rip having the anthem on harmonica, but then I found this guy.