Greg Gabriel: Bills in Playoffs Because of McDermott 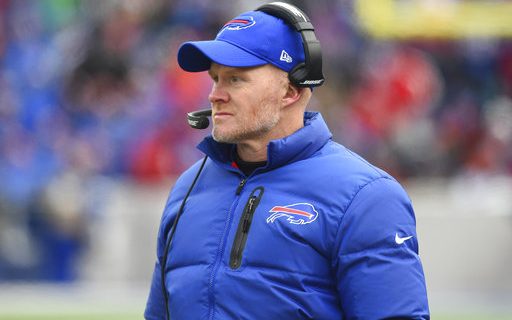 Buffalo Bills head coach Sean McDermott looks on against the Miami Dolphins during the first half of an NFL football game Sunday, December 17, 2017, in Orchard Park, N.Y. (AP Photo/Rich Barnes)

Going into this past weekend’s games it was a given that the Buffalo Bills had to beat the Miami Dolphins in Miami, and then get help from other teams in order to earn a spot in the NFL Playoffs for the first time since 1999.

All along I felt that the Bills would defeat the Dolphins.  What I was unsure of was would the Bills get the help that was needed in the other games. I felt that there was no way the Cincinnati Bengals would beat the Baltimore Ravens in Baltimore on a game that the Ravens needed to earn them their spot in the Playoffs.

The other scenarios involved were Jacksonville needed to beat Tennessee in Tennessee and the Los Angeles Chargers had to beat the Oakland Raiders. Going into the weekend I felt the last two scenarios had a better chance of happening than the Bengals beating the Ravens.
I was wrong on all fronts as Cincinnati came from behind to beat Baltimore in the final seconds and Both Tennessee and Los Angeles won. Sill the important thing is the Buffalo Bills are in the Playoffs for the first time in 18 years and their first Playoff game is next Sunday in Jacksonville.

So How Did This Happen?

The reason the Bills are in the Playoffs is for one reason and one reason only….Sean McDermott. He brought a change in attitude and culture to One Bills Drive and it made a difference in the organization from top to bottom.

Players who either didn’t buy in or the Bills brass didn’t feel had a future with the club were shipped out and replaced with players who believed in the plan. We can look for more of that this coming off season.

As for the upcoming Playoff game, the Bills may be the sixth and final seed but they drew the best opponent. Jacksonville is similar to Buffalo in that they have a young team that has never been playoff-tested. The talent on the Jacksonville team is superior to Buffalo’s but because of their inexperience I feel the game is a tossup.

I will get more into the game itself later in the week, but the big difference in the two teams is at the quarterback position. While Blake Bortles has never lived up to being the third player selected in the 2104 NFL Draft, he has had his best season as a pro.

This year, Bortles threw for close to 3700 yards, completed 60% of his throws and had 21 touchdowns. Compared to the top quarterbacks in the league, those are very average stats but he has won a lot of games this year. Jacksonville did not pick up the option on his rookie contract and it remains to be seen if the Jags try to re-sign him or let him go into free agency.

Buffalo, on the other hand, made the Playoffs in spite of Tyrod Taylor not because of him. He is obviously the weakest quarterback of the 16 playoff teams and he needs to play the best game of his career in order for the Bills to have a chance.

More from Greg on the specific matchup with the Jaguars coming to Buffalo Sports Page later this week.