Greg Gabriel: What’s Next For The Bills? 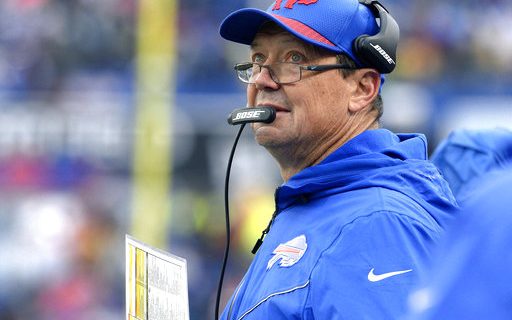 Despite some calls to replace him, Greg Gabriel thinks the Buffalo Bills should give a raise to offensive coordinator Rick Dennison. (AP Photo/Adrian Kraus)

The memorable 2017 NFL season is over for the Buffalo Bills after yesterday’s tough 10-3 loss to the Jacksonville Jaguars. I’m not going to write that the Bills should have won or could have one because they didn’t. The mere fact that they were in a Playoff game is feat of its own.

The best way to describe this team is that it was a hard-working, overachieving team that the coaches got the most out of each player’s talent. This team was in the Playoffs because each player bought in to Head Coach Sean McDermott’s plan and played to the best of their ability. On paper, there were teams with more talent that were sitting home watching this weekend’s games. The players and the coaches should be proud of what they achieved.

What’s next for the Bills? For the coaches and personnel staff it’s a review of the season and the grading of each player. When they have completed that task it will be determined what players from their group of free agents the team wants to keep and offer a new contract to?  Notable free agents include LB Preston Brown, DT Kyle Williams, CB E.J. Gaines & WR Jordan Matthews.  They will also determine if there are players who are still under contract that the coaches feel no longer have any upside and should they attempt to trade or release those players.

McDermott will also review each coach on his staff and make a determination as to his future. Are there coaches on the market that McDermott would rather have on his staff than some of the current coaches? Turnover of the coaching staff is a way of life in the NFL, but I doubt that there will be many changes on this staff.

Keep Dennison & Give Him A Raise

Looking at Twitter yesterday, I saw that there are several fans and media members who feel that current offensive coordinator Rick Dennison should be replaced. I can’t say I agree with their thinking. There will always be fans/media who are unhappy with certain play calls or philosophies of a coach, but reality is their opinions don’t matter. What Sean McDermott and General Manager Brandon Beans feel is all that matters in these cases.

In the case of Dennison, he had to attempt to coordinate an offense without a legitimate NFL quarterback on the squad. All season long we saw the limitations of the offense because of what Tyrod Taylor couldn’t do. The mere fact that the Bills made the Playoffs with Taylor at the quarterback position is remarkable. Dennison shouldn’t be criticized, he should be praised and given a raise!

The Bills will have a bevy of draft choices and a large amount of salary cap space in which to acquire players to improve this football team. That said, the most important task they have this coming off season is to find a quarterback.

Many fans feel the Bill should use their two first round picks to move up in the Draft and select a quarterback. It’s my opinion the Bills would be making a mistake doing that. There is no quarterback in this Draft worth giving up two first round picks or more for, regardless of what some Draft analysts want to tell us. Put simply, they are wrong!

One thing the Bills could do is attempt to sign a veteran quarterback in free agency. It remains to be seen who will be available, but as I write this it looks as if there is a strong chance that Washington quarterback Kirk Cousins will be available. People around the league feel he won’t be franchised again but he could have the transition tag placed on him. If that is the case, Washington would have the opportunity to match any offer a team gives Cousins. To make something like that work, the contract offer has to be so exotic that the Redskins wouldn’t be able to match.

One of the Minnesota quarterbacks could also hit the market. My guess at this time would be that it’s Sam Bradford. If it was me making the decision, I would stay away for a few reasons. One is that Bradford is about a durable as a crystal wine goblet, he is frequently breaks. The other is that his play history is very inconsistent. While he would be an upgrade over Taylor it may not be by a lot.

If the Bills choose to use the draft to acquire a quarterback than they will find that this year’s class is deeper than the 2017 class at the position but not as good up top. I don’t see a quarterback in this class that is good as Mitch Trubisky, Patrick Mahomes or Deshaun Watson. That’s not to say this isn’t a talented group, it is but whoever the team drafts will have to go through a period of development. If the team wants to stay in the Playoff chase they have to hope they get lucky with a rookie and that can happen.

Needless to say, it will be an interesting to watch how the off season unfolds. The Bills have a chance to make themselves a perennial Playoff contender. We all hope they succeed!