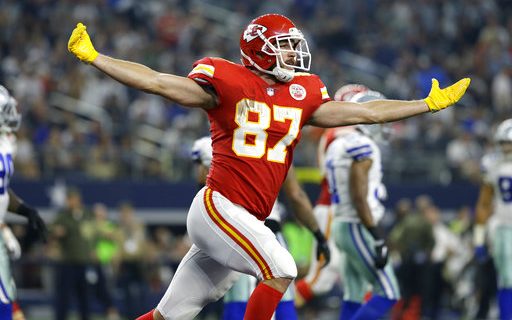 The Buffalo Bills, who are smack in the middle of an ugly three game losing streak, play a tough road game this Sunday in Kansas City. Like the Bills, the Chiefs have not play well of late, losing four of their last five games after starting the season with five straight wins. Though the Chiefs have not played well, they still are a very dangerous team and are very capable of still winning the AFC West.

A side bar to the game is Bills Head Coach Sean McDermott is going against his mentor Andy Reid for the first time as a Head Coach. McDermott was a position coach and a defensive coordinator under Reid in Philadelphia. Many of the principles that Reid has used successfully for years as an NFL Head Coach are being used by McDermott.

This will also be the first game with Tyrod Taylor back as the starting quarterback. As I mentioned earlier this week, Taylor may be the starter right now, but if he falters you can look for rookie Nate Peterman to be back in the starting role fairly quickly. My feeling is that it will happen December 10th versus Indianapolis.

At quarterback for Kansas City is veteran Alex Smith, who early in the season was playing the best football of his career. While he hasn’t been quite at that level recently, he is still playing excellent football. For the year he is completing better that 69% of his throws for over 2600 yards and 18 touchdowns. He has only thrown three interceptions.

The Chiefs main two targets are wide receiver Tyreek Hill and tight end Travis Kelce. Hill is a big play guy who is a constant deep threat. Anytime he touches the ball he is a threat to take it the distance. Kelce is a very athletic tight end who can play in tight or flexed out. He is more of a jumbo wide receiver than pure tight end.

Rookie running back Kareem Hunt is having a great season. He has run for 873 yards and a 5.0 yards per carry average. He is a threat either inside or out as well as being a very reliable receiver. While the offensive line does a very good job run blocking, they have been inconsistent in pass protection having given up 25 sacks to date. This is an area that the Bills need to exploit.

The Chiefs defense is a veteran unit that has been very productive. Defensive Coordinator Bob Sutton has an attacking 3-4 scheme and both outside linebackers are very good pass rushers. Justin Houston is the Chiefs best pass rusher with 7.5 sacks. Dee Ford only has 2.0 sacks but consistently gets pressure. Former All Pro Tamba Hali missed the first half of the season while on PUP, but he has been back the last few weeks and the Chiefs coaches are trying to work him into action. Once back at full strength he can be a tough guy to handle as both a run defender and pass rusher.

The defensive line isn’t as big as it has been in the past, but they are much more athletic and like the outside linebackers, they can put a lot of pressure on opposing quarterbacks. The line hasn’t been quite as good defending the run but by no means are they an easy unit to run on.

The strength of the defense was supposed to be the secondary but injuries have hurt them. They lost Pro Bowl safety Eric Berry very early in the season. Corner Marcus Peters is one of the best in football and many teams just don’t throw on him. The Chiefs recently signed Darrelle Revis but he may not be quite ready to play. At 32, he is more of an insurance policy for the Chiefs.

Must Win For The Bills

The way the Bills have played the last few weeks, this has become a must win game. The problem is, it’s also a must win game for Chiefs.  With the game being played in Kansas City, he chances of a Bills win are minimal. The same can be said next week versus the Patriots. While the fans are suffering for a playoff team in Buffalo, this year is about finding out who can and can’t play for Sean McDermott and establishing the foundation for the future. Fans don’t want to hear that, but this franchise has been mismanaged for so long it will take some time to build a perennial winner. I believe that the combination of McDermott and General Manager Brandon Beane are capable of doing that.