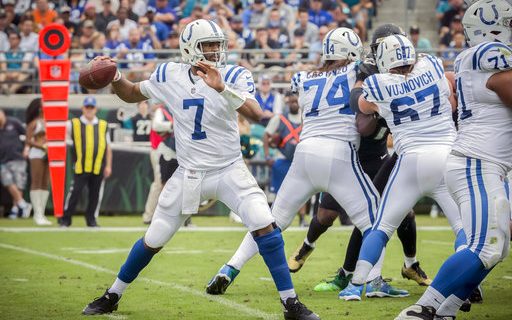 Indianapolis Colts quarterback Jacoby Brissett (7) throws out of the pocket against the Jacksonville Jaguars during the first half of an NFL football game, Sunday, Dec. 3, 2017, in Jacksonville, Fla. (AP Photo/Stephen B. Morton)

Things have not gone well for the Buffalo Bills the last five weeks, losing four of their last five games. In all four losses the Bills have been badly outplayed. Only in the win at Kansas City two weeks ago did the Bills look even close to their strong play form early in the season.

This week the Bills will be clear favorites when they host the 3-9 Indianapolis Colts. The Colts have lost three in a row and six of their last seven games. The Colts don’t look very good on paper, but reality is they have been in most of their losses and even held leads in the second half but just haven’t been able to finish.

Colts Out of Luck

Part of their problem has been injuries, as they currently have 14 players on injured reserve many of whom had been starters. The key loss of course has been quarterback Andrew Luck. Luck had shoulder surgery following the 2016 season and has not yet made a full recovery.
When Scott Tolzien was unable to do anything in training camp, the Colts were forced to trade for New England backup Jacoby Brissett. Brissett being only in his second year with the team has played better of late, but it took him weeks to get comfortable in the Colts scheme as it’s entirely different than the scheme he played in at New England.

Brissett has completed over 60% of his throws for 2500 yards but has thrown only 10 touchdown passes to seven interceptions. His main receivers are speedster T.Y. Hilton and tight end Jack Doyle. Between the two of them, they have 103 receptions and six touchdowns. Wide receiver Donte Moncrief and running back Frank Gore are Brissett’s other two favorite targets, but they aren’t used nearly as much as Hilton and Doyle.

The offensive line has been a problem for the Colts all season with part of the reason being injuries. The best players on the line are center Ryan Kelly and left tackle Anthony Castonzo. While they are legitimate starters, you could make an argument that the others are not. The Colts have given up 51 sacks this year!

The Colts run game is solid with ageless Frank Gore and rookie Marlon Mack. As the season goes on, I would expect that Mack starts to get more carries.

The defense has also struggled. To date they have given up close to 3400 passing yards and 1300 yards on the ground. Again injuries have played a role in their average play. There are at least three starters currently on injured reserve, including first round safety Malik Hooker. Henry Anderson, who is one of the Colts better defensive linemen, is also on injured reserve as well as starting linebacker John Simon. The Colts just don’t have the depth to overcome these injuries. Some of the guys starting are players that would be no more than marginal backups for many teams.

The key for the Bills this week is to play mistake free football. That means no turnovers or stupid penalties. As I write this there has been no word as to who will be starting at quarterback for the Bills. Tyrod Taylor is coming off a knee injury and did not practice Wednesday and had only limited practice in Thursday. It looks more and more like rookie Nathan Peterman will be running the offense. If that is the case he needs to get off to a quick start and get some points on the board.

The Bills have to hope they can run the ball offense and on defense they need to both pressure the Brissett and get sacks. If they can force some turnovers then the Bills should come out with a win. Weather will be a factor and it will help the Bills as the forecast calls for snow with a high of 28. Yes, Indianapolis is a northern team but they play in a dome, when they have to play in the elements it can cause problems.

I look for the Bills to win by at least 10 even if Peterman is the starting QB.