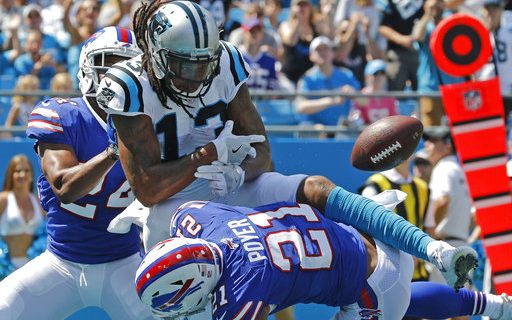 After re-watching the Bills/Panthers game, my first thought is that it’s a very frustrating loss for the Bills. The defense easily played well enough to win.  But as we have seen in both the preseason and in the win last week against the Jets, the offense needs both improvement and consistency.

Carolina has the play-makers to put a number of points on the board and with their very tall receiver corps they create difficult match-ups. The Bills being able to hold the Panthers to just three field goals and nine total points is a remarkable feat.

How often do you see Cam Newton get sacked six times in a game? Very seldom! The Bills pass rush was excellent and was consistently able to put pressure on Newton. Still there is room for improvement as the Panthers wide receivers caught a total of 13 passes, many for mid-sized gains in the middle of the field that kept drives alive. Going forward the Bills coverage has to improve in those situations.

The run defense was superb. Carolina had a total of 79 yards rushing and a 2.8 yards per carry average. That included Newton gaining 27 yards on five rushes most of which were on scrambles. The Panthers first round draft choice Christian McCaffrey was held to just 10 yards on eight carries. He was never given the opportunity to get to the open field where he can be so dangerous. Kudo’s to the Bills defensive staff for putting together a very solid defensive game plan. Anytime a defense plays that good, the team deserves to win.

The Bills offense yesterday was beyond poor. There was no run game and until their final drive, no pass game. You can’t win games with that.

What’s the problem? Its starts with the quarterback position and the passing game as a whole. Bills opponents don’t respect their pass game and game plan to stop the run. They know that if you keep Taylor in the pocket he can struggle to go through a progression and find an open receiver. Taylor is best when he can throw on the run and make plays with his feet. Limit that and stop the run and you have a chance to beat Buffalo every week. That’s exactly what happened yesterday.

Taylor had some good throws in that final drive but Carolina was not playing tight coverage. I don’t recall him making a tight window throw all game. On his final pass the winning TD was there but he threw the ball behind the receiver instead of leading him. If it has proper ball placement on that throw, the Bills win.

In future games, look for the Bills opponents to try and do the same thing as Carolina by keeping Taylor in the pocket and limit the Bills run game. Do that and the bad guys win!
A few weeks ago I wrote that while many Bills fans (myself included) already know what Taylor can and can’t do, the Bills new coaching staff hasn’t been around him that long. It won’t take much longer for them to figure him out. They have a promising rookie in Nate Peterman who has the mental traits and talent to be a winning NFL QB. While the ideal situation is to let him sit and learn, he may be the one who gives the Bills a better chance to win this season. I hope the Bills staff comes to that same conclusion soon.

For more analysis from Greg, visit his Author’s Page on Buffalo Sports Page.