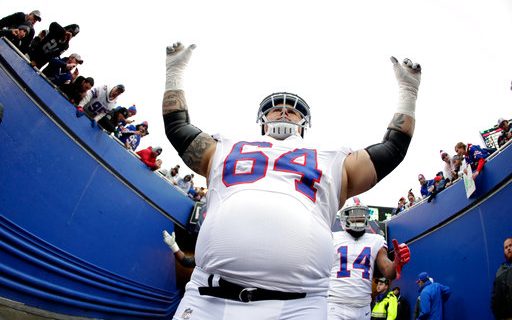 FILE - In this Oct. 29, 2017, file photo, Buffalo Bills offensive guard Richie Incognito (64) takes the field prior to an NFL football game against the Oakland Raiders, in Orchard Park, N.Y. Bills offensive lineman Richie Incognito texts The Associated Press he's "done," amid reports he is considering retirement after 11 NFL seasons. Incognito followed up the text on Tuesday, April 10, 2018, with a laughing-face emoji and did not respond to further questions seeking clarification. (AP Photo/Julio Cortez, File)

In the modern day of athletes controlling their own message, Richie Incognito’s apparent retirement announcement was as simple and straightforward as it gets.

Let’s assume that it’s true, and the Bills veteran guard is hanging it up for a variety of reasons.  He cited his health as one reason.  Being forced to take a pay cut could be another reason.  So could the retirement of his friend and linemate Eric Wood.  I have to think that some of this was also triggered by next week’s start of the Bills offseason conditioning program.  At age 34, maybe Incognito wasn’t ready to begin another grueling grind of getting in and staying in football shape.

While it’s been a checkered career with some notable lows, Incognito has been in the NFL for 12 years and 150 games.  According to Spotrac.com, he has earned over $25 million dollars.  If he’s decided it’s time to step away, any football fan should be able to understand why.

But his apparent departure leaves a big hole in the Buffalo offensive line, and adds another need for the upcoming draft.

The departures of Incognito and Wood means the Bills have lost their two best offensive lineman.  Now, there are big holes to fill at center and left guard.  A strength for the past few years, the o-line has now become a serious question mark.  Not good when there’s a chance a rookie quarterback may need it’s protection.

Maybe the loser could enter the mix at left guard.  Groy has played there before, although not last year.  Bodine has never taken a snap at guard during his four years with the Bengals.

When Vlad Ducasse won the right guard position last season, that left John Miller on the bench.  He has 32 career starts at guard.  The fact that the Bills kept him on the team, even though he sat for 12 games, is a sign that he may still have a future in Buffalo.  Right now, he is the leading candidate to be Incognito’s replacement.

Backup lineman Marshall Newhouse and Connor McDermott could be options, but both are tackles without much experience playing guard.

If the Bills decide to draft a new left guard, finding one is a viable option.  Starting-caliber guards can be found in the second, third or even fourth round.  Players like Braden Smith (Auburn), Isaiah Wynn (Georgia) and Will Clapp (LSU) figure to be available beyond the first round.  This could be the Bills best option to immediately replace Incognito.

But are they willing to use a premium pick on what many consider to not be a premium position?  Will they still have those second and third round picks if they move up to draft a quarterback?

There are still needs at linebacker and wide receiver that have not been addressed.  Now you have to add guard to that mix.  Unless the players on the roster now, or a free agent still available, are good enough, a pick will have to be used for a guard.

What I don’t want the Bills to do is panic, worry about a guard, and change their focus in the Draft to get one.  I especially don’t want them to be hesitant about trading a first, second or third round pick for a quarterback.  Guard are a lot easier to find than franchise QB’s.  There are guards starting all over the league who were low picks or even undrafted.

Yes, there are holes to fill.  But quarterback is the biggest one, and has been for 22 years since Jim Kelly retired.  This is the Bills best chance to go and get a franchise quarterback.  They clearly know that, based on the parade of top signalcallers making their way to Orchard Park.  Brandon Beane might never have as much ammunition to go get a top QB than he does this year.  It has to be his sole focus in the first round. I believe it is, based on everything he’s and the team have done since the trade down in last year’s NFL Draft.

Don’t let the need to find a starting quard change that.