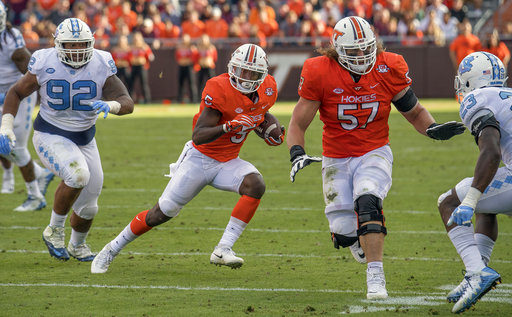 Key Stats: Three year starter at Virginia Tech, where he was a teammate of Tremaine Edmunds.  First team All-ACC in 2017 as a senior.  Most of starts at left guard.

Where He Fits on Bills: In the mix to replace Richie Incognito at left guard.  Will compete with Miller, Groy/Bodine, Newhouse.  Much needed body to add to the competition at a wide open position.

Who He Pushes Off Bills Roster: Possibly Miller if the veteran loses out to Teller.

Expected to Start Right Away?: Maybe.  No clear leader for the left guard spot.  If Ducasse stays at right guard, and Bodine replaces Wood at center, then Teller will compete with Miller & Groy.

Paul’s Take: Very strong player, a mauler.  Doesn’t appear to be very athletic.  That can work at guard.  Hard nosed and a competitor.  Plenty of starting NFL guard have those qualities. Could compete to start at left guard with a great training camp.  May wind up earning a backup spot, or on the Bills practice squad while he works on his athletic ability.  Strong guys can make it in the NFL if the scheme matchs them.  Played at a high level in a good school in a good conference.  Seems to me the kind of player Bills fans will root for.