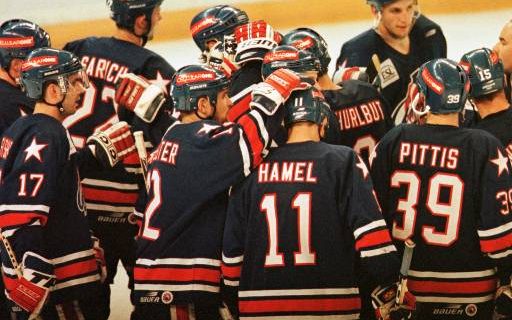 Rochester Americans players have some complaints about being in the AHL, one step below the NHL. Jeff Wozer has discovered those top complaints. (AP Photo)

The Sabres top prospects play in Rochester for the AHL’s Americans. It’s not quite the NHL.  Sports comedian Jeff Wozer has discovered the top complaints of Americans players.

• Foreign players miffed to learn playing for Americans doesn’t allow them to vote.

• Restroom at Junius Ponds rest area is always out of paper hand towels.

• Even Toronto Marlies players don’t know what a Marlie is.

• Expected to know all of the words to Bruce Springsteen’s Born in the USA.

• Bus driver is always in too much of a hurry to stop at Port Byron’s Old Erie Canal Heritage Park.

• The team’s bus mechanic doubles as the team’s nutritionist.

• Players who don’t get called up to Sabres feel as if they wasted money on an EZ Pass.