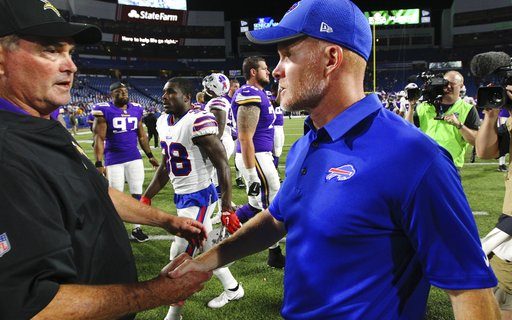 Sammy Watkins will now be taking passes in Los Angeles from the only quarterback in the NFL whose last name looks like a Batman punch sound-effect: Biff! Bam! Goff!

Coach McDermott pulled off the game’s biggest surprise when he ran onto the field wearing slate gray pants, ignoring the expected standard khakis. Said one unnamed NFL official, “Gutsy clothing choice. Especially for a first-year coach in his first game.” The NFL official further added, “To place this in context Belichick never had the guts to try the hoody look until midway through his third season in New England.”

The first half of the Bills-Vikings game had the disorganized feel of a last second Meetup group for Large Guys with Football Helmets.

The second half was no different than watching Black Friday shoppers surging through Walmart’s just opened doors at midnight: people running without direction; bodies getting trampled; screaming and yelling.

Not everyone was pleased with last week’s trades. Bill Belichick filed a grievance with NFL headquarters over the Bills trades. Said a seething Belicheck, “I thought we had an agreement that we, and only we, get first dibs on all ex-Bills players.”

Belichick, according to unnamed sources close to the situation, was so angry he ran amuck at home with a pair of dull pruning shears lopping the sleeves off his suit coats.

Beane, during the press conference, said:

After, when Beane was asked if he knew he was close to the record said, “I sensed I was close when after the third consecutive sentence my wife and kids were rushed into the press conference area to perhaps witness history. It would had been special. But after the fourth consecutive sentence I lost focus when I saw Sullivan, I think, from the Buffalo News, roll his eyes.”

Beane added he hopes to go for the record at his next press conference using the cliché “there are no easy games in this league.”

The current record was set in 1991 by then Oakland A’s manager Tony LaRussa, who, following a loss, uttered the cliché “one game at a time” in five consecutive sentences

…The Bills in 2018 will move training camp to Lily Dale with the hope of improving the team’s ability to correctly call coin tosses…Family Feud this fall will pit former coaches and general managers still getting paid by Pegula Sports & Entertainment against former Sabre players still getting paid by Pegula Sports & Entertainment…The health insurance industry this week will declare “Being a Bills fan” as a pre-existing condition…Starting this week Coach McDermott, during post-game press conferences, will only take questions from the Amherst Bee…