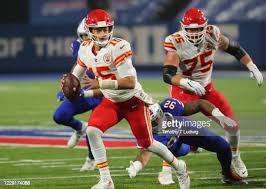 Losing the last game of a season always stings.

That was no different Sunday night after the Kansas City Chiefs claimed victory over the Buffalo Bills in the AFC Championship game 38-24.

Looking back on it, as good as the Bills were this season they really didn’t stand much of a chance against the defending Super Bowl champions. The pundits, twitterverse, Vegas, they were all against them. Does it make the loss any less painful? Of course not but we know now exactly what it will take to stand toe-to-toe with them next year.

All season we’ve known they were not very good at putting pressure on opposing quarterbacks or stopping the run. What is Kansas City exceptionally good at? Running the ball. What are they even better at? The quarterback position. Patrick Mahomes can run, extend plays and find his targets. Whether it’s a yard past the line of scrimmage or 40 yards down field. It does not hurt they have some of the best playmakers in all of football on the receiving end of those passes either. Buffalo had no answer for Tight End Travis Kelce (13-118, 2 TDs) or wideout Tyreek Hill (9-172).

The Bills did a very good job of stopping Chiefs running back Darrel Williams, limiting him to just 52 yards.

Mahomes (29-38/325/3TDs) was as good as expected. Playing in his third straight AFC championship, he went out and performed like the reigning MVP. He was sacked only once and did not turn the ball over.

The Bills biggest break of the game came early in the first when Chiefs punt return specialist Mecole Hardman coughed up the football at the Chiefs goalline giving Buffalo a first and goal. The result was a Dawson Knox touchdown reception, putting the Bills up 9-0 (extra point try missed).

Although there were moments where Bills linebackers had Mahomes on the run, the kid (and he is still a kid) was able to escape, find wide-open targets and extend drives. Even though the Chiefs were not able to run the ball successfully, Mahomes and company used short passing plays and screen routes too effectively move the chains. Buffalo simply did not have the right personnel or the coverage to defend Andy Reid’s brilliant offensive game plan. Quite frankly, they put on a clinic.

The biggest takeaway from Sunday’s loss will be the amount of space our defenders gave the Chiefs receivers. Hill and Kelce had all kinds of separation and used it to their advantage. While Hill ripped off long runs after making uncontested catches, Kelce was sitting pretty without a defender within an earshot.

The two biggest weapons ran roughshod all evening. Leslie Frazier’s defense simply was not up to task.

Rumblings throughout the game on social media were unmerciful in regards to Sean McDermott’s calls on 4th down and his unwillingness to go for it on three different occasions.

The first such opportunity came at the end of the 1st half with Buffalo trailing 21-9 and Buffalo’s offense facing a 4th and goal from the Chiefs 2-yard line with 14 seconds remaining. KC had scored three straight touchdowns and would receive the second half kick-off; Buffalo’s previous two drives resulted in punts.

It’s easy to second guess this decision. Especially given the Bills aggressive history in similar situations, including earlier in the game. This moment however was a little different. Although Buffalo’s offense seemed to be clicking on this drive, it would have been unforgiveable had they come away with nothing. The Bills took the three points and went to the locker room trailing 21-12.

The Chiefs offense responded in the second half with a couple of large gains. The first play went for a large chunk but was challenged sighting the receiver (Hill), stepped out of bounds. Eventually KC settled for a field goal, which in essence was a small victory for Buffalo’s defense.

Allen led the Bills offense on an impressive drive on their next possession, guiding them down inside the Chiefs 10 yard line. When 4th and 3 came up, McDermott once again elected to kick the field goal. The armchair QB’s once again came out in full force.

Kansas City wasted little time and responded with another touchdown drive, increasing their lead to 31-15, commanding a two score lead. Buffalo was in a hole for sure but the offense showed some glimpses of hope and the next opportunity for them seemed promising.

The Bills were marching down the field Allen using his arm and legs effectively. He did take a brutal sack (one of a few) but was able to take the chunk of yards lost back and buffalo was moving forward once again. The drive ended when Allen’s pass slipped through the hands of John Brown and into the arms of Rashad Fenton, Allen’s first red zone interception and it couldn’t have come at a worse time. KC turned that into a touchdown extending their lead 38-15.

I can understand the thinking from critical fans. You do need to score touchdowns against a dangerous team like the Chiefs. Yet even with the decision to kick field goals, Buffalo still had opportunities to score themselves AND stop Kansas City. They did neither.

This could have looked a little different had those scenarios played out.

Buffalo made major strides this season but conventional wisdom suggested that as a whole, they are missing several key pieces on both sides of the ball. Coaching is not one of their issues.

Buffalo would be wise to find another quality pass rusher and perhaps an upgrade on the defensive line. Jerry Hughes and Ed Oliver were missing in action for much of the season. They didn’t come up big when the defense desperately needed them too. Is Tremaine Edwards good enough to be a starting middle linebacker on a Super Bowl contending team? How about Devin Singletary, he is certainly not as capable as Thurman Thomas was, few are. Nevertheless, that’s what they need.

I sent a number of text messages to my brother during the last few weeks comparing Bills teams throughout their history. As giddy as we have been this season’s team and reflecting back on the 90’s Bills we both agreed this team was good, but where is Bruce? Where is Thurman? This team had neither.

I hope that Brandon Beane will use this latest loss as another tool when making his decision on which free agents he should target and how to approach the next NFL Draft.

The focus should be on defense. That’s exactly where the Bills struggled on Sunday. If Frazier leaves for Houston, so be it. Bring in the best coordinator available but give him a capable pass rusher.

The team overachieved, reaching the AFC Championship was a stretch to believe at the beginning but now that they’ve done it, nothing short of a return next January is acceptable.

Beane knows where the team fell short, time to go out and bridge the gap.