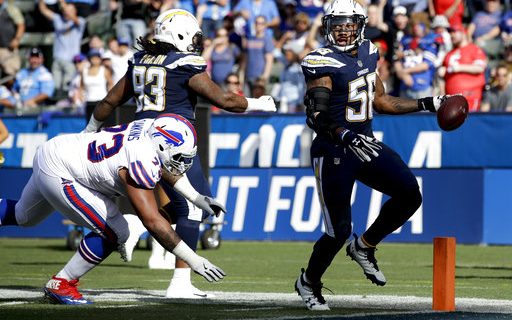 The Los Angeles Chargers may not be the favorite, but Bob Gaughan thinks they are the team to bet in the AFC West. (AP Photo/Jae C. Hong)

LeSean McCoy TD run—It provided a glimmer of hope. Only a glimmer.

The Weather looked nice in L.A.

Hockey Fights Cancer —It continues to be a great initiative for the NHL and community to support those that are facing all forms of that horrible disease.

Chris Myers —I’ve long admired his work, and think it’s great Fox has given him his own booth. He’s earned it.

Tyrod Taylor— Not his play, but the example that he has set for kids that are paying attention. Taylor was pissed, but didn’t let that interfere with supporting his teammate Nathan Peterman. When called upon, he went out and played hard. Sports teach many things. While he’s not the greatest QB and will be gone after his season, he certainly is an example of what it’s like to be a good teammate, and how to handle things not going your way with class.

Kelvin Benjamin injury—Hope the news isn’t bad, but I’m not expecting it to be good. Would he have made a difference for the rookie? Who knows.

Regretting the Result—Sean McDermott offered that up when asked if he regretted the decision to start Peterman. He shouldn’t second guess himself. He doesn’t have time. But the result is tied directly to the decision, so he should have just stuck with NO.

The Sabres–Reality is starting to set in that this just may be a bad team, again. They’re on the same pace as “The Tank” season with 5 wins in the first 20 games.

Pick 6 — It was right in DiMarco’s hands.

2nd pick— Peterman can’t just chuck it up like that.

Picks 3, 4, 5—Nathan Peterman had a historically bad half of football. It was ugly. Blame whomever you want, he gets to own it for the rest of his life.

Line of scrimmage—Both the offensive and defensive lines have been dominated three weeks in a row. Injuries and age may be taking their toll.

The Schedule — The Chiefs and Pats (twice) coming up.