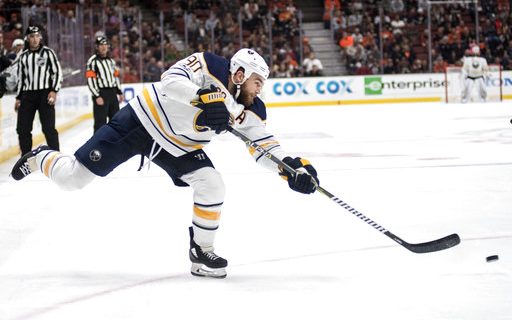 –Phil Housley’s First Win. The Sabres gave their new head coach his first career win with a prevent defense 3-1 win in Anaheim Sunday night. There were reports of tremors in Southern California, but it was actually the 5000 lb Gorilla jumping off of Housley’s back.

–A Week Off From the Bills. Admit it, watching other games is more enjoyable than watching the Bills play each week. There’s no stress or maybe a little depending on your fantasy team. You admire the other players on other teams. It’s a grass is greener thing.

–The Things I did on Sunday. I checked in and out of NFL games all day long, but didn’t hunker down like a normal day. I got to watch my son swim in a meet for the first time. He was pretty fast, and the entire competition was fun to watch. It was actually the first swim meet I’ve been to (hard to believe), and I was impressed with the entire operation. I hope my kid stays interested in it so I have a built in reason to attend more of them (just not on fall Sundays).

We also celebrated my mother’s birthday with an annual trip to a pumpkin farm. It was good old fashion fun on a warm, breezy day. Corn mazes, finding the perfect pumpkin, and feeding farm animals were also completed. We checked all the boxes. Great day.

–Jack Eichel’s Passing. From setting up Jason Pomminville to Zemgus Girgensons, the kid is dishing!

–Justin Bailey. Recalled all the way to the west coast and pots one his first shift. I never thought he should have started in Rochester anyway.

–Syracuse Orange. College football is great because of games like Friday night at the Carrier Dome. The Orange upset the #2 Clemson Tigers 27-24. It was a great game to watch, reminding this childhood ‘Cuse fan of the good old days. The fans storming the field was must see TV, and Dabo Sweeney embracing Dino Babers after the loss was very classy. Good stuff all the way around.

–Roger Federer. In what may have been the coolest thing over the weekend that nobody knew about because of time zones; Roger Federer beat Rafal Nadal to win the Shanghai Masters. It was Federer’s 5th straight win over Nadal, who can’t wait to get Federer back on a clay court.

–Calling Up Bailey. Phil Housley had to pull out all of the stops early. Kyle Okposo has the flu (a little early?), but Seth Griffith has given them squat so far.

–Robin Lehner Big Save Timing. The big guy was the reason I thought this team would and could still contend for a wild card spot. If that’s going to happen, he has to start making big saves late in the game when victory is on the line.

–NFL Stars Going Down. Within the last 7 days, the NFL has lost JJ Watt, Odell Beckham Jr, and now Aaron Rodgers. It’s the year of the injury and it’s hitting the league hard (and my fantasy team-Rodgers).

–Drew Anderson Injury. Can UB catch a break? The backup turned stud was carted off the field in the first half against Northern Illinois Saturday and did not return. The Bulls lost 14-13, a second straight week the team suffered a would’ve, could’ve, should’ve loss. Anderson stays in the game, UB wins.

I don’t really have any ugly for this week. Feeling too good after a great family day. Okay, I’ll give you one—The Sabres power play. How is it possible they have given up 5 shorthanded goals already this season?. Terrible.

-Here’s 2: NFL Replay. You can explain it 6 ways to Sunday, but that was a TD for the Jets.