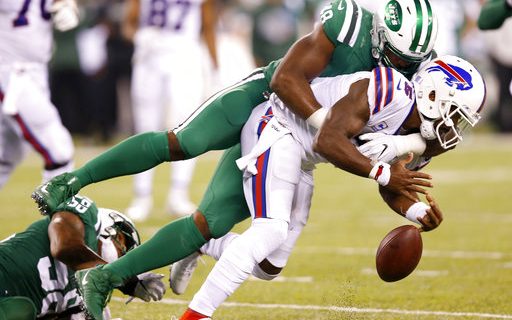 Buffalo Bills quarterback Tyrod Taylor, bottom, fumbles the ball as he is hit by New York Jets outside linebacker Jordan Jenkins (48) during the second half of an NFL football game, Thursday, Nov. 2, 2017, in East Rutherford, N.J. The Jets recovered the ball. (AP Photo/Kathy Willens)

The Good, Bad, and The Hound

Tony Romo—He’s not polished, but he tells you what’s going to happen, and explains what happened without talking above the audience. And how about the great explanation on why Tyrod stayed in the game? Stating that you don’t need the backup throwing a couple of TD’s was as candid as I’ve heard.

Zay Jones-The kid is making catches in traffic and coming around. A TD to boot.

World Series —I wanted Yankees vs Dodgers, but Astros vs Dodgers was pretty darn great.

Dilly Dilly —The new What’s Up?

Sabres Win – 5-4 over the Coyotes. Who cares that the ‘Yotes almost came back for their second win of the season. Glad to see Kyle Okposo finally score his first of the season too.

Benjamin inactive-There was every reason not to play him, and they used them to sit him. I understand he doesn’t know the playbook, but he knows how to get the ball.

Zay Jones Injury—It looked ugly, and when the announcers say “Oh” it never is. However, he came back………and then aggravated it again.

“To force us to play games on four day weeks, it’s completely unfair and bulls*t.”

World Series Start Times —As a kid, I remember watching the World Series after school and finishing the game with my dad when he got home from work. I couldn’t do the same with my sons because the games ran too late.

Facemasks and Fumbles—Killed the Bills.

Blaming Tyrod Taylor—Fans will blame Tyrod Taylor for the loss when he deserves very little blame. I thought he actually looked poised in the pocket and used the middle of the field. He was throwing well when he had time to throw. There was zero running game, and most of the passing game is predicated on play-action. He had no chance. The defense (which gets most of the credit for the five wins) was terrible too.