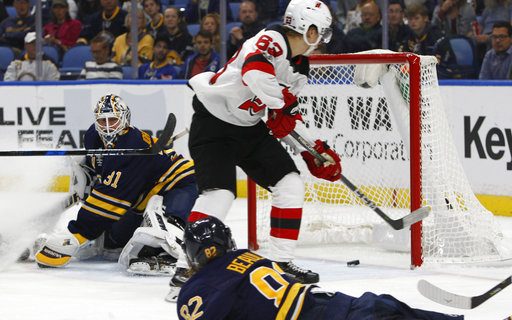 The marketing tag line for the Buffalo Sabres this season is Sharpen Your Swords. A clever play on the team’s moniker. Most battalions in the movies would hear their commander say “Ready your swords!”, a command that doesn’t appear to have been given. The team looks like they used Rosetta Stones to get their blades ready because they don’t appear to be speaking the same language on the ice.

With the hiring of Phil Housley by new GM Jason Botterill, and some new additions on the blue line, there was hope of better play than what fans witnessed last year under Dan Bylsma. There were plenty of nights last season when the team looked like it didn’t want to play.  Three games into this campaign, some players look like they can’t play.

Harsh, yes. Reality, no. This team is not that bad despite getting down 4-0 to the Islanders on Saturday and eventually losing 6-3. Monday afternoon’s kids day was low-lighted by a second period disaster. Chad Johnson was hung out to dry as the Devils stole passes and odd-man rushed their way to 4 more goals on top of the 2 they scored in the first period. Game over, 6-2 loss.  Stevie Johnson had a better chance of a comeback in Buffalo Monday afternoon.

Opening night was promising for Housley and his Sabres. The subsequent games showed it’s not going to be that easy. Chemistry and experience matter. Sam Reinhart has no chemistry with any of the wingers he’s played with yet. Nathan Beaulieu has been pretty bad coughing up the puck. I still think he’s young enough and talented enough to contribute, but he does not look like top pair material. The power play has given up four shorthanded goals already this season. Too much too soon. The goaltending has been tender, the product of seeing too many lamps lit behind them.

It is way too early to panic. The team heads out on an early season bonding trip out west to find themselves while we try to stay awake looking for improvement. Fans are right to be confused and perhaps, dismayed. But they will hang in there because as dull as Monday’s game became, the team will start carving out some wins. If not, the losses will start to cut deep.