Kevin Sylvester: What Took So Long? 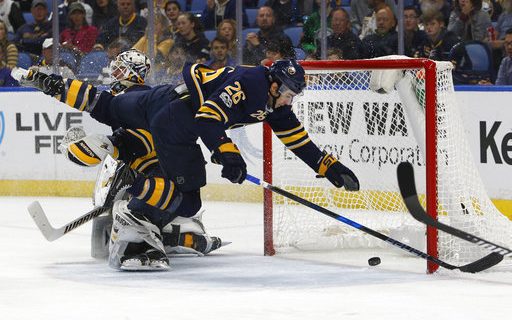 What Took So Long?

Job’s title is safe, but it seemed to be in jeopardy. Jason Botterill was contending for most patient person known to man, but it finally wore thin when he made a trade and placed Matt Moulson on waivers. Losing hockey games pales in comparison to the trials and hardships Job experienced in the Bible, but you get the point. Botterill waited too long.

That’s an easy thing to say now, but it’s also fair criticism. The Sabres have been awful this season, and the GM stood by and watched for too long. Minor thruway moves with Seth Griffith and Hudson Fasching were just that, minor. Rumors from the hockey media elite (Eliot Freidman, Darren Dreger, etc.) starting circulating that the Sabres will listen to trades for anybody not named Eichel. A trade did occur, as a 5th round pick was sent to Detroit in exchange for gritty forward Scott Wilson, who has two Stanley Cups to his name. A move. Several well read content producers hailed it a great move. Come on. A team within their division traded the Sabres a player for a 5th round pick. That’s not a great move, and it’s an indication of just how low the bar is right now.

The trade for Wilson deserves zero criticism for Botterill. It’s a move. In conjunction with that move was the waiving of forward Matt Moulson. A move questioned by absolutely no one. That’s not true. I have a question, what took so long? Moulson has underperformed ever since he signed a 5 year 25 million dollar deal to return to the Sabres from Minnesota, whom the Sabres traded him to at the 2014 trade deadline, along with Cody McCormick (who also returned to the Sabres). Moulson recorded 41 points the first year under this contract, with 13 of them being goals. He managed 8 the next year, and 14 last season. Those are not totals expected of a forward making 5 Million a year to light the lamp, but enough to think he would continue to contribute. That turned out to be wrong as he did not record a single point in 14 games and was scratched the other 13.

Not a single point. Scratched 13 times. At what point did Botterill figure ‘okay, that’s it’? They would have been wise to waive him coming out of training camp, and if Evan Rodrigues (oddly enough called back up now) didn’t get blasted in a pre-season game vs Toronto, Moulson might have been. Of course business might have gotten in the way too. Botterill must have thought someone might be willing to take the slowed forward if he got off to a good start, or better yet, the new coach would give him a fresh start. Most Sabres fans could have advise to the contrary.

Some may still wonder how the Sabres got this contract so wrong in the first place. He was being paid like a 30 goal scorer, but had only done it while playing with center John Tavares on the Islanders. He was coming off a 23 goal season in ’13-’14, while playing for the Islanders, Sabres, and Wild. The Sabres were going to tank, having traded away any veteran that was established and good. The team also had to spend enough money to reach the salary cap floor. Moulson was their man. The selling point to Moulson, a big contract to live through a couple of years of losing, and then being the mentor to the young stud they would draft.

He lived through the losing, and did do his part in mentoring, allowing Jack Eichel to live with his family. He was a team player, and perhaps respect for that led to more patience and chances from the organization. That had to run out, as players in Rochester have proved to be better options, and those players could no longer be fooled about having to pay their dues.

Don’t feel sorry for Matt Moulson. He’ll get his money, and he was loaned to the Ontario Reign in California, putting him closer to his brother-in-law Jonathan Quick of the Kings. He’ll enjoy the great weather for a little while too. It was also classy of Botterill to find another place for him to play, far away from everything that didn’t go his way. Maybe that’s why it took a little longer to execute the waive, but for most observers, it wasn’t soon enough.