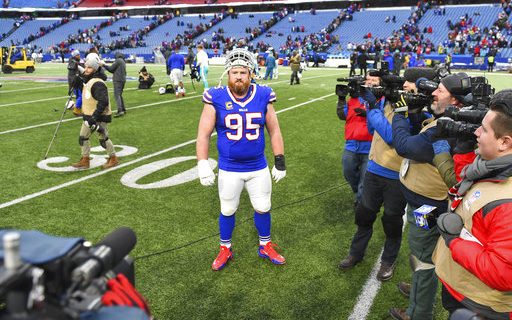 Kyle Williams is coming back for more. The veteran DT has decided to play one more season (at least that’s what the contract is for) for the Bills, rather than retire. He could have played for any team, but the Bills made the most sense, since Buffalo has been his team for all 12 years of his career. Actually, the Bills were the only team that made sense.

I’m sure there were other teams interested in his services, even if it would be a limited role on the defensive line. He’s a grunt, a warrior, and a leader. He’s exactly the type of veteran player all coaches love to have. A guy that works hard day in and day out, leaves it all on the field, and takes young players under his wing. Qualities that are attractive to any franchise.

But seeing Williams in another uniform would be unattractive. I’m sure the jersey would slide nicely over the pads, but it wouldn’t fit optically. Kyle Williams is a Buffalo Bill. New Era Field is where he belongs. He loves it here and the fans love him. That is said about most players with most teams, but with number 95, it’s genuine. The ending of the playoff drought was about the fans, and about Williams being a part of it. Seeing his jubilation added to the experience for everyone.

Much like the city he plays for, I feel Kyle Williams is no longer an underdog. The secret was out several years ago about his play. Players that competed against him knew he was a handful and hard to play against, but fans around the league hadn’t fully noticed. The city has been on the comeback for years, but major publications have finally taken notice with all of the millennials flocking here, and the re-development that has come with it.

We’ll see how expectations affect his play. I’m sure Kyle Williams is expecting to build on his first ever trip to the playoffs. He’ll playing alongside Star Lotulelei, and a new QB drafted to bring hope, and TD passes. We’ll also see how fans react to the expectations too. Ending the drought was one thing, but building on it is another.

Many of the familiar faces are gone, Tyrod Taylor, Cordy Glenn, and Eric Wood to name a few. Perhaps that’s fitting since the Bills are heading into unfamiliar territory this season, a team looking to return to the playoffs. Whether they make it again or not will depend on whomever they play at QB (rookie or free agent veteran), and on guys like Williams. Solid veteran players, ready to do whatever it takes to to win.