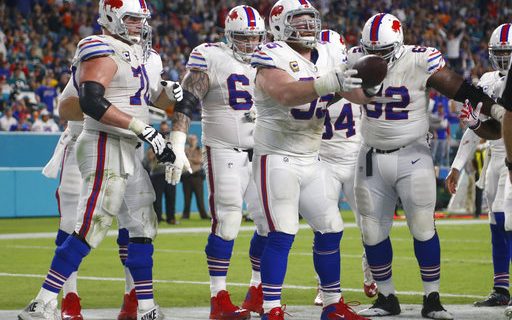 Buffalo Bills defensive tackle Kyle Williams (95) celebrates with his teammates after scoring a touchdown, during the second half of an NFL football game, Sunday, Dec. 31, 2017, in Miami Gardens, Fla. (AP Photo/Wilfredo Lee)

It’s not an official title.  More of a symbolic one.  There’s no trophy, or award.  You don’t even get a Key to New Era Field.

It means you’re beloved.  It means you’re the player the fans want their kids to meet.  It will forever mean you’ll rarely buy a drink in this town, and always have people line up for your autograph.

He is everything we want our players to be.  On and off the field.  To be “Mr. Buffalo Bill,” we have to love you.  But you also have to love us.

He arrived as an overlooked 5th round draft pick in 2006.  Kyle’s effort, drive and talent have vaulted him to the brink of the Bills Wall of Fame.  On the field, he is a rock at defensive tackle, earning five Pro Bowl berths.  His 43.5 career sacks are the most ever by a Buffalo defensive tackle.

In the locker room, he is the unquestioned leader of the team.  There’s a reason his pregame and postgame team speeches have become must-see TV.  He is the heart, soul, and conscience of the team.

Off the field, and in the community, Williams is a spokesman for the team and the city.  He has made himself and his family a part of WNY, something that doesn’t happen as much in the transient NFL.  Even though he doesn’t live here fulltime, he feels like one of our own.

Wrap all of this up in a Blue & Red blanket, and you get a Mr. Buffalo Bill.  Scoring his first career TD in the playoff clincher just adds to it.  Having his sons in the locker room as part of the celebration was the cherry on top of the Celebration Sundae.

Watching this on repeat all day. #GoBills pic.twitter.com/vq7sFAumHq

There’s a good chance Kyle will retire after the playoffs, those 12 seasons at a difficult position taking its toll on his body.  He does not have a contract for next season.  Wouldn’t it be cool if he decides that he can’t play anywhere else, and retires as a Bill?  When does that happen anymore?

Even though he’ll no longer suit up, and likely will move back to his native Louisiana, he’ll always be a part of Buffalo.  We’ll always get excited when we know he’s back in town.  We’ll remember that touchdown forever.  We’ll compare the next wave of hulking 325 pound run-stoppers to that not-so-hulking, high motor, a little short and squat #95.