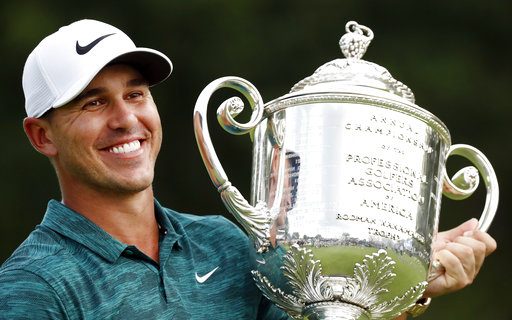 -Tiger Woods was tired on Saturday following the 3rd round. He played 29 holes, and you could tell he was drained during his interview with CBS afterwards. He’s 42 and human now, but his brain is still the toughest in the game.  Sunday was different. Tiger had energy and used it to electrify the gallery. He was awesome with a final round 64, his lowest Sunday round in a Major. That’s hard to believe, but it was. While the golf world is celebrating his 2nd place finish and a great performance, I’m sure he’s lamenting the tee shot on 17, and some misses earlier in the week. Either way, it’s great having the big cat in contention, and it will be extra special when he grabs a win against the generation of young players he inspired to play.

-Gary Woodland will be thinking about the 10th hole for a long time. He did something we’ve all done at some point. His first bunker shot (3rd shot on the hole) raced across the green to the another bunker. He played that bunker shot (his 4th) onto a quick surface that had too much pace and rolled back into the original bunker he was in. The bunker hadn’t been raked yet, and he was forced to play his 5th from a terrible footprint lie. He barely got it out with his 5th. His chip from the upslope and rough almost went in leaving a tap in 7. It was painful to watch, but a great example of composure and recovery as he worked his way back up the board to have a chance on Sunday.

-I’m happy for my friend Mark Immelman who is doing a great job for CBS. I work with Mark on PGA Tour Radio and he couldn’t be a nicer guy or more knowledgeable about the game. He has quickly inserted himself into the CBS Golf lineup, and sounds comfortable.

-Brooks Koepka may finally be appreciated. He is rarely talked about as one of the best young players in the world, but he will be now. Koepka has won back to back U.S. Opens and the PGA. That 3rd major puts him right there with Jordan Spieth in that category, and two ahead of his good buddy and World 1 player Dustin Johnson. It also moves him ahead of Curtis Strange, Andy North, and Lee Janzen, player that also have two U.S. Open victories.

Why was Brooks Koepka underappreciated? I think it’s because he hasn’t won with regularity on the PGA Tour. He has just 1 win on the Tour outside of his 3 Majors, the 2015 Phoenix Open. Spieth has won 8 other times, Johnson 18 times, Jason Day 11, and Justin Thomas 8 times. Add the fact that Koepka is quiet off the course and not in many commercials, and you have your answer. Perhaps that changes now with his latest achievement.

The U.S. Ryder Cup announced the first 8 players to the squad by virtue of order of finish following the PGA Championship. Rather than list them, check out this cool presentation from the PGA of America put out on Twitter.

The first 8 members of our team!

That leaves Captain Jiim Furyk 4 picks. If I were Furyk my choices would be Tiger Woods (no-brainer), Phil Mickelson (next captain?), Zach Johnson (experience and tenacity), and Matt Kuchar (makes a lot of birdies). Kevin Kisner and Tony Finau could bump one of them out as well as Bryson Dechambeau, but I think Bryson hurt his chances by not making the cut at the PGA.

-I played in the Championship Flight at Fox Valley for the first time over the weekend, and I learned a lot about my game and competition. I went in knowing I had very little chance of winning, or even coming close, but that’s now why I played. I played for the challenge. I wanted to see how I stacked up under pressure against the best players at our club. It was a scratch event from the black tees which members rarely play. Matter of fact, I had never played the back nine from the tips. The first round was my first look at it. Here are my takeaways and some other notes:

-I was paired with my friend Nick (the +1) in the first round and will admit to getting caught up into not having a huge gap for round 2. It didn’t work. He shot an awesome 73 on day one. I shot a not so awesome 84. As most golfers would say, I should have been better (actually Nick said it). I had 3 putts that took a trip all the way around the hole and popped out. 3 of them! Another 3 putts lipped out. That’s 3, and maybe another that should have fallen. But I wasn’t too bad, the 2nd and 3rd best scores from day 1 were 81 and 82, so I wasn’t that far off.

-I was determined to play better and prove I belonged in round 2. My front 9 didn’t help as I shot 43, thanks to double bogeys on 7 and 8, holes I usually have birdie putts on. I was 2 strokes worse than Friday, but I was feeling good heading to the back 9 after making a par on our toughest hole (the 9th). I started the back with a par, then a 3 putt bogey on 11, but a birdie on 12 gave me some energy. I had doubled 12 and 13 the day before. A bogey on 13 dampened me a bit, but I finished very strong parring in from 14-18. Four of the 5 finishing pars were up and downs (scramble), and I had the best back 9 that day with a 37. My score of 80 was right there with the 77 and 79 by the leaders.

-I was feeling confident heading into the final round. I had a great range session, and felt I could break 80. That was dashed on the first tee. I hit a high cut (fade) and l lined up for it. It’s a good shot on the first hole, especially from the back tee, but the ball didn’t fade. I thought I had put it in the hazard, but a tree branched kept the ball in play. I was blocked by two other trees, and to spare all of the blows, took a double bogey to start. Ugh. I hit three putts on the par three third hole (we all bogeyed with a tough pin), and made the mistake of being aggressive on a 15 foot birdie putt on the 5th hole that turned into another 3 putt bogey. I had a great look for birdie at the 6th, but just missed on the low lip. Then it happened.

On the 7th tee box, my goal was to put the ball in play and not over cut it and bounce in the hazard as I did in round 2 taking a double bogey. I aimed a tad further left. I hit it well, and the ball grazed some leaves off a tree, but still had good pace. I saw it bounce on the other side of the creek, but did not see the finish. When we got up to the fairway, we could not find the ball. WTF! I was distraught. The bounce kicked it right, and into the hazard. It seemed impossible, but there was no other possibility. We determined the line and entry point, and I took my drop. Double F bombs now as the ball buried into some very thick rough. I only had 143 to the front of the green (pin was right middle with water up the right side) and used the hardest 5 iron I could swing to hack it out. It ran up the fairway to just off the green on the left. I’m okay I thought. Get up and down for a 5 and all is good. Well, my ball wasn’t. It was buried in a deep depression and covered by grass. I actually drove by it and playing partner Tom found it and just shook his head. It was the worst lie I had all week. Just buried. I fried egg in a bunker would have been better. I closed the face on my lob wedge and actually hit a good shot that ran across the green and settled on the fringe. My bogey putt from 20 feet came up just short leaving a tap in 6. Another double bogey. I was pissed, dismayed, and ready to snap.

Still pissed, I hit a decent drive to the middle of the fairway on 8, but it was a little short. I had 175 to the flag and figured find the green and all will be good. Nope. I heeled the shot and it killed a few worms along the way. I was now mad at myself and not the course, even though I glanced over at the adjacent 7th fairway and flipped it the bird. My third, a short pitch spun left and to the collar of the hard slope. My bogey putt came up a few short and I told the group (playing in a threesome) that I’d finish. I missed the f#$king tap in!! I took another double, the same thing as round 2, and was in disbelief.

I just wanted a drink at that point.  A double Bullet on the rocks please. Nick, Tom, and Dale (who was following us) all felt bad for me. I knew all hope was gone for a sub 80, but I honestly said to myself there was a lot of golf left, and I could salvage something even facing the hardest hole on the golf course, the 9th. I hit another solid drive, and hit what looked like a great approach, but it bounced right and off the green. Nick and Tom both told me good shot as they were trying to pick me up. All class by those two gentlemen.

I didn’t hate my lie, as I was hole-high, less than 20 feet with a good lie. I could chip in, it looked that good. I hit the chip and it felt perfect, but the ball just caught the seem of the fringe and surface and rolled out. It was a bad break, leaving me a 10 foot downhill slider. I made it! A par and some energy heading to the back nine after a 44 that felt like a 54.

-Nick Ambrose defended his title as Club Champion with a final round 72! He birdied 15-17 on his way in. Tom Cornell was the runner up, and his final round 78 was impressive too. He has us both by several years in age. Great player.

-Overall it was a humbling and encouraging experience. I pushed myself and was pushed by the course during the 54 holes. I can’t wait to do it again next year, but I am going to try and find a little more distance between now and then!