Lift, Clean, and Place: I Should Have Golfed and Final Ryder Cup Pick 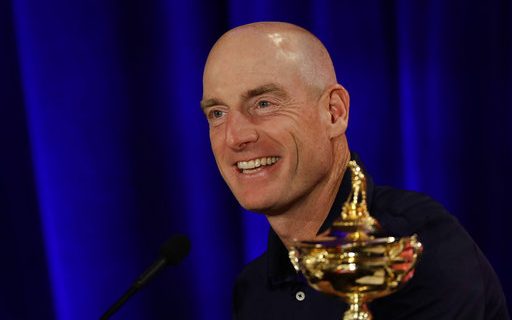 -I should have golfed instead of watching the Bills game, and I knew it. After 20 plus years of covering the sport, working with former coaches and players, and talking about it my expectations were low. But it was the opener, and my golf buddy hosted a party (he’s an awesome cook too), so I went. Good thing I was with good friends because the game was terrible to watch. We could have and should have golfed. Bills games in recent years have been a great time to play a fast round of golf because most of WNY is watching the game. I would bring my radio along (can’t listen on WGR’s app due to NFL restrictions) to follow while playing golf. It’s a great way to do it even when every other work Murph says is an advertisement (which I can appreciate and respect–$$).

Watching golf, the final round of the BMW championship, was going to be an option except it was rained out in Philly. Nobody is hoping they finish on Monday more than Jordan Spieth. He is on the bubble entering the final round (31) to make the top 30 and the Tour Championship in two weeks. Spieth needs to make it happen or he’ll be in violation of a PGA Tour rule on number of tournaments played in a season. I think he makes it, and if he doesn’t, what happens is well above my pay grade. Many writers have been all over this and probably hope to see it happen because it makes for a good story. He is one of the game’s stars, but that doesn’t mean he’s above the rules, and he knows it. It will get figured out amicably if he doesn’t play his way in (I think he will).

-USA Ryder Cup Captain Jim Furyk will make his final pick Monday night for the Ryder Cup squad. Europe already selected all 12, and Thomas Bjorn welcomed some second guessing by picking Sergio Garcia who has not had a great year on the course. Sergio missed the cut in  all four Majors.  Furyk can’t go wrong in my opinion with whose left to choose from. The top candidates are Tony Finau, Xander Schauffele, and Kevin Kisner. Finau has been excellent the last few weeks and has a chance for another top 10 at the BMW Championship. That would surely get him the spot, right? Schauffele entered the final -16 with a chance to win. If he wins the BMW Championship, Furyk would have to give that serious consideration. Kisner is a tough competitor, has some experience in international competition, but has been outplayed by the other two guys, and even Zach Johnson, who has an outside chance of convincing the Captain to return him to the squad.

I think Finau gets the slot based upon his performance all season long, and especially in the Majors. He showed grit at the Masters playing through and ugly ankle sprain. He finished T10 at Augusta, 5th at the US Open and T9 at the Open Championship. He’s also 11th on Tour in birdie average, and you need birdies at the Ryder Cup. Schauffele finished second at The Open and The Players Championship, but being 76th in birdie average doesn’t overcome Finau to me.

-It’s amazing what one shot can do to turn a tournament around. I participated in The Harvest tournament at Fox Valley Club this past weekend. I played with my best friend Will, whom I’ve know for over 40 years (impossible since we’re both in our 30’s-at least it feels that way). We played well the first day in the 2 man scramble, but missed some short birdie putts. Four of them inside 10 feet! Yuck. The second day was best ball and we started out hot, but that quickly cooled thanks to some terrible shots on the 5th and 6th holes. We both hammed and forgot the eggs. Hopes dashed 7 holes in.

The back nine provided a chance for some redemption with the side match the tournament had arranged, a Ryder Cup style format within the best ball overall. That was fun, but at times cumbersome with scoring. Nothing great was happening on the first few holes, but then one shot turned it all around.

The par three 14th hole is uphill to a complicated green. There is a ridge in the middle of the green that separates it into two tiers. When the hole is located in the front middle (only real spot it can be on the front), the shot is to hit the slop and have the ball feed down to the hole. I have come close to an ace with that pin position several times. I was hoping the hole would be in that location for the final day of the tournament, but it was not. Instead, it was located middle left, about 5 paces from the ridge. I had a 7 iron in my hand as my scope said 148 on the view finder. I grabbed it because I couldn’t figure out the wind, and the day before I hit 8 iron to a flagstick that was 158 and hit it just past the ridge, but spun the ball to the front of the green. After reconsidering the wind direction (deciding it was slightly helping) I went back to the back for the 8.

I teed it up a tad higher than usual (I tend to put the tee all the way in the ground) with the intention of playing a slight draw to the hole. I figured I was going for the flag because it was the last chance to win something (closest to the hole) on the course. I flushed it. It was right on line with the flag, looking good all the way. I quietly said, “go in”. The ball landed just past the hump of the ridge and released towards the hole. It was tracking!

The ball took a slight left turn, following the contour of the green and came to a halt very close to the cup. At least it looked that way from the tee. As we drove up the hill and got closer to the green, confirmation of a great shot. It was a kick in! The group on the 12th tee remarked that they couldn’t believe it didn’t go in. The ball dove at the last minute. I checked the closest to the pin marker and 8’2″ was the last recorded effort. I was well inside of that, 1’3″ to be exact and in the money.

I was concerned that it wouldn’t hold up, and Will told me I was crazy. There only 4 groups left and I had stuffed it. I was chicken to count my chickens. It held and salvaged an otherwise so-so day of playing. And it was another example of how one shot can turn around an entire round of golf.