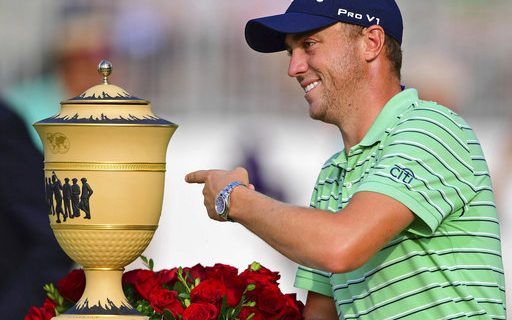 -Just when you were wondering what happened to Justin Thomas, he goes out and wins the WGC Bridgestone Invitational. Thomas was impressive early in the week with rounds of 65 and 64. A round of 67 on moving day gave hime a three shot lead going into Sunday, and his final round 69 sealed the deal against the world’s best players. Of course Thomas is one of them, and with the win he joins Dustin Johnson and Bubba Watson as a three time winner this year on the PGA Tour.

The win for Thomas is notable because of recent struggles. His last PGA Tour event was back in June at The Travelers Championship where he finished tied for 56th. He missed the cut at Carnoustie in The Open. This win puts him right on track to try and defend the PGA Championship this week in St. Louis.

-Time for my pick(s) for the PGA Championship. It’s the last chance to win a Major in 2019 and the game’s biggest stars are ramping up their game. Dustin Johnson and Justin Thomas head into the week winners in recent weeks. Rory Mcllroy had been a factor all season. Jason Day made a nice late charge. Bryson DeChambeau is having a great season and should be a factor. I will give you three choices.

Francisco Molinari–The guy is having the best summer of any golfer, and is coming off his first Major win at The Open. His ball striking is superb. Fairways and greens will serve him well.

Justin Thomas--Coming off the win and looking to defend.

-There are players to root for this week at the PGA Championship. Everyone in golf is waiting to celebrate with Rickie Fowler when he wins his first Major. He’s still young, but not a kid anymore. Rickie can be seen quite often sticking around to congratulate his fellow competitors and friends when they win. It’s his turn sooner or later.

A win by Tiger Woods would break the internet. He struggled at Firestone CC on Sunday, but the big cat is having a great return to golf.

Rooting for Phil Mickelson is always in fashion. Lefty melded fashion and dancing in this year’s best commercial.

-I had a GREAT time at the Ganson Depew Invitational this past weekend at Wanakah CC. The camaraderie, food, and competition were fantastic. I’m not stepping on a scale this week!

It was my first time playing in the event and I was excited because I had heard so many great things about it. It’s a four day invitational as opposed to many of the 2 or 3 day tournaments. Here is the breakdown of how it works.

Day 1–Best ball qualifier with the top 16 scores advancing to the Championship Flight (we didn’t make that). A score of 66 got you into an 8 team shootout for 2 spots. That is great shooting and high handicaps (just a fact, not judging)! The shootout was awesome as the entire field followed along in carts.

Day 2–First round matches in all flights, and they bracketed. We lost our first match (they are 18 hole matches) 2 and 1, leaving 3rd place the best we could finish.

Day 3–It was moving day in a sense. A win on Saturday means you play on Sunday. We won which made the formal dinner that night taste that much better. The question everybody asked that night was “Are you playing tomorrow?”. It felt great to say yes.

Day 4–Flight place matches and championship match. We ended up winning 2 and 1 for 3rd place and then watched the conclusion of the championship match along with a very large gathering of family, friends, competitors, and club members. It was cool to see so many people out there following the action.

With that out of the way, here are my observations and game notes:

-When following a shootout in a cart, don’t park on the left side of a hole. Adrenaline causes more draws than fades, and our cart was hit twice!

-I am not a patient poker player. The stag night feature a late Hold Em game that I was badgered into. After entering, I realized I didn’t want to sit there for hours and made a hasty exit on some dumb bets.

-I drove the ball the best I have over any four day period, but my ball striking was not on par Thursday and Friday. I was over swinging, and therefore, long and left on most holes. That is not the spot to be at Wanakah. I finally learned my lessoned for the weekend, and faired much better results with my regular tempo.

-The 2nd hole at Wanakah is a nemesis to me. Four years ago I made a double bogey on that hole (my final hole of a charity tournament) to miss a trip to Pebble Beach by 1 stroke! So, I was looking forward to exorcising that demon. On Day 1, I four putted from the back fringe for a double bogey. On Day 2, I was well off the back of the green, and again made double bogey.

On Day 3, I decided to play the front left pin, short right. The approach rolled off the severely sloped, fast green to about 10 yards off the front. I chipped at the pin, but it rolled at my feet. I chipped again with the same result. The third trip came down the hill to my feet again! The fourth finally made it to my original intended destination, and I pumped it in for a 7!

On Day 4, I striped my drive and hit a tremendous approach to 4 feet! I missed the damn birdie putt, and tapped in for a 4 I would have gladly taken four years ago!

-18 hole matches are much tougher to play than 9 hole matches. And I dare say they are more fun too.

-Lockjaw is becoming an epidemic. Play would speed up with these two words “It’s good”. I’m kidding of course. The weekend round 3 footer is no gimme in match play.

-Be careful when tossing a club in disgust. It can get stuck in a tree (not me).

-The best part of Invitationals is the new friends you make.

And a huge thanks to all sponsors and participants at the 3rd annual Duster Challenge. We raised $2300 for the WNYPGA Reach Foundation to help fund their Hope program for veterans.