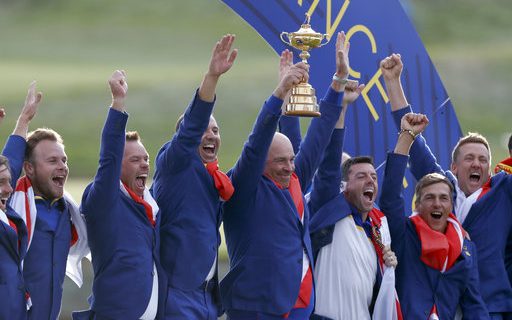 Europe team captain Thomas Bjorn holds up the cup as he celebrates with his players after the European team won the 2018 Ryder Cup golf tournament at Le Golf National in Saint Quentin-en-Yvelines, outside Paris, France, Sunday, Sept. 30, 2018. (AP Photo/Alastair Grant)

What the heck happened to Team USA? That is the question the entire golf world is asking now. From taking a 3-1 lead in the first session to getting blown out the rest of the way, it seemed improbable. But it happened, Europe won in spectacular fashion. Like everyone else in golf, I will offer my opinions on why Team USA didn’t retain the Ryder Cup, and why it wasn’t close.

Style of Play: The American team is known for the long ball, so Europe set the course up to put a premium on accuracy. That is not to say that Europe didn’t have guys who smash the ball (Rahm, Rose, Mcllroy) and tried to, but more Americans play the long ball. The rough took that away on the golf course.

Soil.  America doesn’t win on European soil, so this should not shock anyone. The fact that Europe was trying to win the cup back on their home turf brought even more passion out of the team and fans in attendance.

Team First: As much as the task force and pod system have corrected the all for one and one for all attitude needed to pull together, Europe is still more of a connected team. Sergio Garcia said it best in a television interview with Steve Sands, that Europe has so many options when it comes to combinations of players because they all get along so well and love the Ryder Cup. USA is more closer than they have been, but Europe still seems to be closer knit and few golf styles seem to contrast.

Putts dropped: Let’s not get too carried away with all of the previous team and soil stuff. Europe made some putts and Team USA didn’t. That’s golf, and in match play anything can happen.

In the end, Europe played great and two fellas that great years led the charge, Tommy Fleetwood and Francesco Molinari.

The best things about the Ryder Cup

Passion: It’s great to see fist pumping and playing to the crowd and the hugging of teammates. The fans treat it like a football match (no matter what side of the pond you’re on), and come prepared to cheer. It’s great.

The Gear: What the teams wear has become a big deal, and always a topic of discussion. Aside from the Saturday Europe gear (burnt Orange?), it was pretty great and I wouldn’t mind a set delivered to Tee 2 Green Headquarters (okay, maybe not the white pants).

Celebration: You have to admit, it was an awesome celebration when Francesco Molinari secured the Cup for Europe. The place went nuts, and it was fun to see just as it was when Team USA won in 2016.

Mimicking: The Ryder Cup and some form of has been and will be replicated in many golf clubs all across the world for us amateurs to compete in with fellow club members and hacks. It’s great fun, and worth doing.

Things that were not great with this Ryder Cup

Final Match:  The Cup was secured but Bryson DeChambeau and Alex Noren had to continue playing their match (went to the 18th hole) in a passionless effort. I understand the point needed to be decided and the individual record part of it, but it was over. Or course Noren made a birdie bomb to send the place into a frenzy to win 1 up.

Phil’s Finish: A tee shot into the water is not how anyone wanted to see Phil Mickelson finish his Ryder Cup playing career. He had a terrible week, following up his struggles heading into the Ryder Cup. It should not take away from the fact that he had a very good PGA Tour year, and played well enough to be selected by Captain Jim Furyk. Many thought Furyk should have selected some other players, but Phil deserved to be on the team.

Tiger. He wasn’t able to follow up his Tour Championship and had a disappointing week. His Ryder Cup record is a shocking 14-21-3, and his 21 losses are 1 behind Mickelson’s 22 for most all time. That doesn’t seem real for the two of the greatest golfers ever.