Lift, Clean, and Place: Thank Goodness Golf Was On 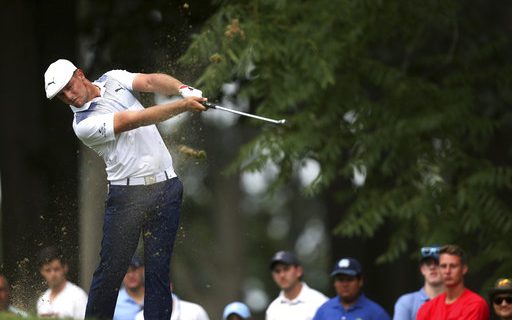 Bryson DeChambeau hits a tee shot on the sixth hole during the final round of the Northern Trust golf tournament, Sunday, Aug. 26, 2018, in Paramus, N.J. (AP Photo/Mel Evans)

After cleaning up and drying out from a day and night of camping Saturday, I budgeted Sunday afternoon to watch Josh Allen and the Bills vs Bengals in what was supposed to be a dress rehearsal for the regular season. Thank goodness golf was on!

The game was terrible, for the Bills anyway. You can read Paul Peck’s take on it for more, but this is about golf. I flipped to the finish of the Northern Trust Open to watch Bryson DeChambeau win his third career victory, and second of the season. The tournament wasn’t really in doubt as he entered the day with a 4 shot lead, birdied the opening two holes, and was on virtual cruise control en route to -18 and a four show won over Tony Finau. It was impressive, and the third victory in the last 13 months for the 24 year old.

The win moved DeChambeau to the lead in FedEx Cup standings heading into this week’s second playoff event in Boston. It also should cement his spot on the U.S. Ryder Cup team. There is no way captain Jim Furyk can leave him off of the team now with one of his 4 Captain’s Picks. DeChambeau was 9th in the standings after the PGA Championship where he missed the cut. The win yesterday was a great bounceback for Bryson, making it an easy choice for Furyk.

I didn’t have DeChambeau making the squad despite his solid play up to yesterday.  I didn’t see him fitting into the team concept as he marches to a different beat on the golf course. His approach, style, and clubs are unique. It’s what makes him compelling to watch, and so good at a young age. The more I think about it, being on the Ryder Cup team will probably help him become even better. A scary proposition for the rest of the PGA Tour.

U.S. Ryder Cup Captain Jim Furyk is going to have some tough decisions to make. Tiger Woods, Phil Mickelson, Zach Johnson, and Matt Kuchar were my predicted selections. They were a nod to past victories and experience in the team competition. I still think Tiger and Phil will make it, but Z.J. and Kooch are in jeopardy. DeChambeau gets a spot, and Tony Finau is making a very strong case too. Finau was runner-up yesterday, his 3rd second place finish this season to go along with six other top 10’s. He hits the ball a mile and makes lots of birdies, which serves players well in match play.

Furyk will name three more players following this week’s second playoff event in Boston. Tiger and Phil should get the nod alongside DeChambeau. That will leave one spot left and a lot of interest in the final two weeks of the FedEx Cup playoffs to see who gets it. I mentioned Finau, and he needs to continue playing well to convince Furyk to add even more new blood to the team. The same can be said for Xander Schauffele who was actually ahead of Finau in the final Ryder Cup Standings. Missing the cut in New Jersey didn’t help Xander.  But don’t count him out, as well as Zach Johnson, Matt Kuchar, or Kevin Kisner. Johnson finished the best of that bunch at the Northern Trust with a T40. Kuchar was T60, and Kisner T73. Not great, but they head to Boston with a lot to play for. Kuchar is the guy to watch with two top 10 finishes in the past five years at TPC Boston.

-Will you pay to watch Phil vs. Tiger? You bet! That was my answer when asked that question several times this past week. Phil Mickelson and Tiger Woods have set the winner take all match for Friday November 23rd at Shadow Creek in as Las Vegas. The prize is $9 Million and it will be available on pay per view. A lot of golf fans are disappointed by the last part. Why pay per view? How much will it cost?

This is a battle of golf titans, so it’s being treated like a Heavyweight fight, which you and I have paid to watch before. There have been plenty of lousy fights I’ve paid to watch, so why should this be any different? I also believe this will allow each of them to take home some money as the $9 million goes to the winner of the match and each of them a likely percentage of the PPV take. That hasn’t been confirmed, but I can’t see both of them doing this without some kind of payday. Either way, it should be great and fun. Heck, I’d like to be there, and I wonder how the betting will be at the sports books in Vegas

-Funniest thing I heard this past week on the golf course: “Am I going to have to read about this match on your website?”. That was from a league competitor last Wednesday evening at Fox Valley. My answer was no, but I guess now it’s yes. I’ll keep it simple. We won, he and his partner didn’t. I hope I can say the same next week.

-I’m considering retirement from camping. It’s been a short and wet career.