Sometimes we all wish we could just lift it out of the rough and place it a better position or just throw it on the green.  After watching some of the lies PGA Tour players had to deal with this past week at Muirfield Village Golf Club in Dublin, Ohio, I think they wish they could too. The rough was lush due to a late and rapid growing season (same for us in Buffalo), and was swallowing golf balls on shots that missed the fairway or green. I witnessed two hosel rockets, three duffed attempts, and more mishits in person than I’ve ever seen from the game’s best.

This just means there are human beings playing on the PGA Tour. But what makes them super human is what they do after the miscue. They typically take their medicine, and make a strong play to recover. Too often, we amateurs try the heroic play instead of the smart play. While chipping out seems weak and unheroic, it’s often the best route to complete the game’s objective of putting the ball in the hole. In an effort to help, here are three factors I consider on what type of play to make from the rough (and what I’ve noticed the pro’s do too).

That’s how I handle it. Consult your club pro, or the other gurus for more tactics and technique.

The field at The Memorial was star-studded, and I had the treat of covering the first two rounds of the Rory Mcllroy, Dustin Johnson, and Jason Day group. Day played excellent with back to back 68’s to enter the weekend -8. Dustin Johnson fired a 66 in round 2, a great putting performance to put himself into the mix, while Rory fought to make the cut at even par.

Golf is a funny game. On Saturday, Day and Johnson struggled, but Mcllroy was on fire. Rory fixed his woes off the tee (hit two in the water on Thursday), and shot 64. That put him at -8, with an outside chance in the final round. When I interviewed Rory after posting the low round of the tournament, Rory mentioned that he found a “little something” on the range, but was genuinely happy to be playing on the weekend. I could see that he meant it from the expression on his face, and it was a reminder that the best in the world still enjoy the game, and have fun in the business of golf. 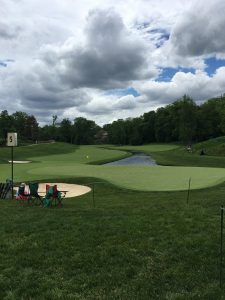 -Muirfield Village is The Place. It is an absolutely gorgeous property and kept in immaculate shape. Known as Jack’s Place, after founder and designer Jack Nicklaus, everything is done right in a traditional way. Many say it’s modeled after Augusta and The Masters with the old fashioned scoreboards, walking scorers with no standard bearers, and even the green wrappers on sandwiches. I recommend planning a trip (about 5.5 hour drive from Buffalo) next year to attend the tournament. It will be an experience!

I was able to experience one of the legendary milkshakes in the clubhouse. You’re probably thinking ‘how good could the milkshake be?’. The answer is incredible. Of the 16 flavor options, I decided on the buckeye since I was in Ohio. It was peanut butter/chocolate, and was easily the best I’ve ever had. I’m not overstating that. It was the best milkshake I’ve ever had!

-Better than the milkshake was finally meeting and interviewing the great Jack Nicklaus. I spoke with the Golden Bear following the presentation of the Nicklaus Awards for the top collegiate golfers in all divisions of play. While I was waiting to speak with Jack (we’re tight now) it was neat to see him spend time with each winner and show genuine interest in their college career and path for the few that were turning pro. My conversation with him concerned that, memories of his two victories at The Memorial, and the condition of Muirfield Village.

I had wanted to get a picture with The Golden Bear, but it was not the right setting. But something cool happened when I reached the 18th green with the final group of the day. Jack was sitting next to the green and I thanked him again for doing the interview. He said no problem and shook my hand again. His assistant grabbed me and said “Glad I saw you. I took some photos of you interviewing Jack and want to send them to you”. A great week become tremendous at that point.

My only gaff was not mentioning I was from Buffalo and talking Bills football with Jack! Next time.

Remember, if you need a 4th, call me.