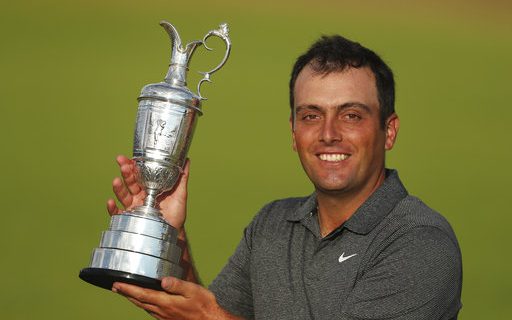 The Open Championship is fantastic. It tests every golfer to play a different style, battle the elements, the course, and the other great golfers. This year’s edition was not different. Carnoustie turned into Carnasty as it’s known with the wind on Sunday. It gave golfers fits and created high drama with the many big names on the leaderboard with a chance to win. At different points in the day, Jordan Spieth shared the lead with Xander Shauffele, and then Tiger Woods had the lead all by himself. That lasted only 45 minutes thanks to a double bogey on 11 and bogey at 12 for Tiger. He couldn’t recover, but it was great to see him in contention. It was also great to see a weekend charge by Justin Rose, and Sunday charge by Rory Mcllroy. They both finished at -6, which we all wished would be the number. That would have produced an exciting playoff. But Francisco Molinari would have none of that.

The ball-striker extradonaire was on point and mistake free during the final round. He’s a cool customer that rarely shows any emotion, but finally let it out with a birdie at the last to reach the insurmountable -8. I covered him during all four rounds at the John Deere Classic, and he was outstanding finishing 2nd. That was a follow up to his win at the Quickens Loans National. Quite a month for the Italian golfer whom his  peers call “Frankie”.

—Johnny Miller and Dan Hicks were excellent as usual on the broadcast. My favorite line from Miller was after Tiger tried a very hard shot on 11, “Golf seduces you into trying things you have no business doing”. That’s the hole Tiger made double on.  Hicks was even more clever before Xander Schauffele hit a 3rd bunker shot from and awkward stance, “Schauffele looks like he’s in a Pilates class all day”. Great stuff.

—I was surprised to see Jordan Spieth falter on Sunday. That’s not his MO. He’s an intense competitor that rises to the occasion, but was off in the winds and a chance to repeat as Champion Golfer of The Year.

—My pick going in was Rickie Fowler, but it was not meant to be. His round of +2 73 on Saturday derailed his chances. I believe he will win a Major. Everyone believes he will, and that has to be weighing on him.

-We saw a lot of hard pan during The Open Championship and during rounds of golf in WNY over the past few weeks. The lack of rain here has created hard fairways and crusty lies. It’s a different feel and contact that you have to make to play it well. We discussed it on the Tee 2 Green radio show on Saturday, in particular, how to hit chip shots off of hard pan. One of the keys mentioned by PGA Pro Jeff Mietus was to take a club with less bounce to hit chip shots with. The bounce on a 56 degree wedge can get caught up and create a skipping effect when contact is made. A 60 degree wedge has less bounce, and room for cleaner contact off the hard ground. Overall, I play the ball slightly back in my stance to ensure the contact with the ball to avoid the skipping effect or the club catching on a dusty divot.

-Have you seen comedian Conor Moore and his golf impressions? He is excellent. Enjoy!

-Congratulations to Cassie Stein, Michael Vitch, and the Porter Cup committee for completion of the 60th edition of the amateur tournament at Niagara Falls CC. It’s not easy putting all of that together, but they do it year in and year out with excellence. The member at Niagara Falls CC should also be commended for continuing to let their course be used for both the Men’s and Women’s Porter Cups. Giving up your golf course during prime time in a short season is not the easiest thing to do.

-I had the pleasure of playing in the Ham-Am again this year at the Porter Cup. It was a treat to play with the ETSU Junior to be Trevor Hulbert. He was a polite young man with a pretty good sense of humor. He grew up around the game of golf, as his dad Mike won three times on the PGA Tour.

-I am in the midst of some driver struggles. I know it’s not the driver, but I decided to change shafts in it anyway. I like the result as I’m a hitting a slight draw with more distance. The problem is, I keep aiming left because I was hitting a slight fade. I either need to get my fade back (preferred) or start trusting that it will draw and aim for the right side of the fairway.