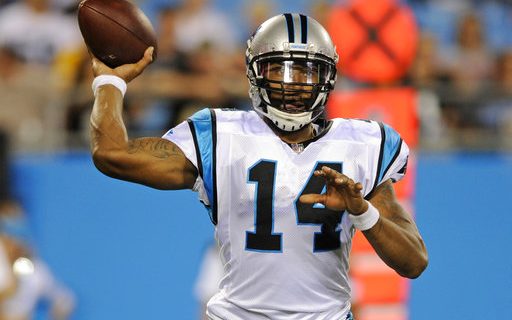 Carolina Panthers' Joe Webb (14) looks to pass against the Pittsburgh Steelers in the second half of an NFL preseason football game in Charlotte, N.C., Thursday, Aug. 31, 2017. (AP Photo/Mike McCarn)

It all made for a confusing Labor Day, and questions remain about Taylor’s status for Sunday’s season opener against the Jets.

First, the team announced the signing of veteran quarterback Joe Webb.  That gives them four QB’s on the roster, a rarity.  Head Coach Sean McDermott confirmed that Taylor and backup T.J. Yates were still in the concussion protocol, and offered no indication of their status for Sunday.  But signing Webb was a clear indication that both might not be ready, and Webb would serve as Nathan Peterman’s backup against the Jets.

If Peterman does make his debut as the Bills starting quarterback, McDermott is confident.

But later in the morning, the team sent out a picture of Taylor practicing.

Adding another layer to the quarterback story, is a tweet from Buffalo Sports Page NFL Expert Greg Gabriel. He’s made it clear he is not a Taylor fan, and Greg thinks the best thing to happen is Peterman starting on Sunday.

Peterman will be the starter and hold on to the job

We’ll have more from Greg on his thoughts about Taylor & Peterman later in the week.