My time in “The Show”

The Red Sox celebrate the last out in their win over the Blue Jays on Wednesday. It likely will be the last time for decades that a major league game is played in Buffalo.

Beginnings are often exciting if scary, while endings are usually emotional if sad.

No wonder I was feeling confused on Wednesday night.

As you know, the Toronto Blue Jays ended their stay at Sahlen Field with a series against the Boston Red Sox. It was part of a summer that everyone could imagine what it would be like to have a major league team call Buffalo home. “Say, let’s go see Mike Trout on Sunday!”

But my part of the story has an extra twist. This summer always will be the time when I was employed by Major League Baseball, even if my contributions essentially started and ended in the same night.  And that requires an explanation.

I worked on the Buffalo Bisons’ gameday staff as a Field Timing Coordinator (FTC) in 2018 and 2019. That’s the guy that throws the switch to time the period between pitches, batters and innings on the Triple-A level. I’ve written about it before; it’s a fun summer job for a semi-retired fan of the game like myself.

I was laid off in 2020 when the Bisons’ season was cancelled. The majors do use a clock for timing the period between innings and batters, but I wasn’t hired by Toronto. When it was decided that the Blue Jays would be back in 2021, they wanted someone local to do it. One of my fellow FTCs, Dan, was set for that job, but they needed a second person in case of illness, emergencies, etc. That person became me. I was told from the start that I probably would only do a game or two, which was fine for the purpose of seeing how it all works. I also had to go though the hiring process by MLB, which was quite interesting.

First off, the company needed a resume. I haven’t really needed one lately in retirement, but I did a little updating and sent it off. I also had to supply some medical information, a copy of my driver’s license, birth certificate, and passport, and so on. Then I had to take a written test. If you wondered what you needed to know to turn a clock on and off for such a test, I was with you.

It was a 50-question, multiple-choice, timed examination on scoring decisions. Does a run on a passed ball count as earned? Can a pitcher pick up a blown save and a win in the same game? You get the idea. Even though I wasn’t applying to be an official scorer, I was quite sure that I did fine. I discovered later that the company wants people in the job who know something about baseball, if only to fit in and understand what is going on in front of them. I got a 90 percent score, which was quite satisfactory considering I couldn’t study for the exam since I didn’t know what was coming. I would have needed a 97 to become an official scorer.

I did save the email saying I had been hired. I launched into setting up the various computer programs needed for the job, most of which were unknown to me. I guess I recognized Workday from Phil Mickelson’s golf shirts, but that was about it. As for email, I was on a list to receive a statistical update each morning on the status of games, clippings from various media outlets from the day before, and news releases. I even received the memo from Commissioner Rob Manfred telling me why MLB would be closing its offices for Juneteenth. I took some on-line instruction on office behavior and Covid-19 protocols, and attended a welcoming orientation via Zoom. It’s all well run, professional and vast. The biggest fringe benefit was receiving a free subscription to MLB.TV, not including blacked out teams (Mets, Yankees, Indians and Pirates in this case). That meant, for example, I could watch almost all of the Blue Jays games – including the ones played a few miles from my house.

Then I waited. No one got sick or had a car breakdown. Finally, we came up with the plan for me to work the last game of the Buffalo portion of the season. A training game is required, so the night before worked out well for everyone. So, I knew I was headed for the big leagues on July 20 and 21.

I showed up on the 20th, with one eye on the sky and its dark clouds. It took a little time for someone to find my credential to get in the building. Once I received it, I headed up to the press box – paying my first visit to that area for the first time in almost two years. It had been taken over by the Blue Jays, more or less, for their own use. The media was sent to workstations at the top of the lower bowl behind home plate. If you were wondering, there wasn’t a broadcaster in sight in the building. The announcers for the Blue Jays and Red Sox worked from home. That foiled any thoughts I might have had of chatting with Dennis Eckersley of the Red Sox broadcast team. As you might know, Tuesday’s game was rained out. Sigh. So what happens to me now? Some consulting was done, and MLB decided that Dan and I both should show up the next day. They easily could have told me to get lost under the circumstances, so the gesture was appreciated.

Luckily, the weather was on my side on Wednesday.  Dan and I chatted about the job, the year, the pandemic, and the near future. Then the game began, and it was time to be serious. He took the first two innings, as I watched in the next seat. Then we switched seats, and I took it the rest of the way. He talked me through the various things that came up, corrected mistakes, etc.

Yes, there were a few mistakes. The FTC is something of a prisoner of habits and anticipation. The basic job is to turn on the clock for 20 seconds between batters and two minutes between half-innings. Sometimes the wrong button got pushed by accident. Once I didn’t immediately notice that the pitching coach was walking to the mound (30-second time limit). There are some situations that require special handling. For example, if the catcher is on the field on offense when the last out of the inning is made (either as a runner or as a batter), the clock counting down the two minutes starts when he enters the dugout to begin putting on equipment. That can add about 10 to 15 seconds of time between innings.

Then there are surprise stoppages. At one point, outfielder Danny Santana of Boston was injured on a play. Even though it was quite obvious that there would be a delay, the timer is still run for the 20 seconds between batters. At least I didn’t have a video review during the game, as the timer must wait for the manager to decide whether he wants the umpires to take a look at a play. Consoling thought throughout the night: Since there are no penalties for “violations,” I couldn’t ruin a wonderful night at the ballpark for a sellout crowd no matter what I did.

The FTC has more to do in minor league games because the period between pitches is timed. Therefore, it’s a different rhythm in the majors. I also kept track of certain moments between innings, such as when the first batter of the next inning was introduced on the PA system. For the Bisons, I followed actual violations as well as the number of mound visits.

It took a few innings before I started to become comfortable on the job. By the end of the night, I thought I was about ready to solo in my next game. Sadly for me, there was no next game. The Blue Jays were ready to pack for home. To put it into baseball terms, I was “designated for assignment” – DFA. If I go unclaimed on waivers, I’ll be assigned to Buffalo in Triple-A East (I miss the International League name already) when they return on August 10.

But, I was in the Show. That’s what the major leagues are called in the minor leagues. I can now tell people forever about my time in the bigs – just like Crash Davis did in “Bull Durham”:

“Yeah, I was in the show. I was in the show for 21 days once – the 21 greatest days of my life. You know, you never handle your luggage in the show, somebody else carries your bags. It was great. You hit white balls for batting practice, the ballparks are like cathedrals, the hotels all have room service, and the women all have long legs and brains.”

You’d have to change the length of time, and drop the parts about the room service and long legs, for that quote to fit me. But I had a peek behind the curtain at Major League Baseball’s operations. And how many people get to do that? 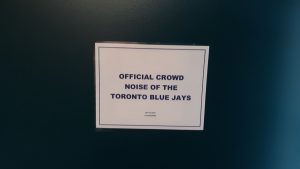 This was on the door of one of the booths of the press box. Artificial noise wasn’t needed once fans were let in the door for games.