Paul Peck: Where Is the Comeback Football? 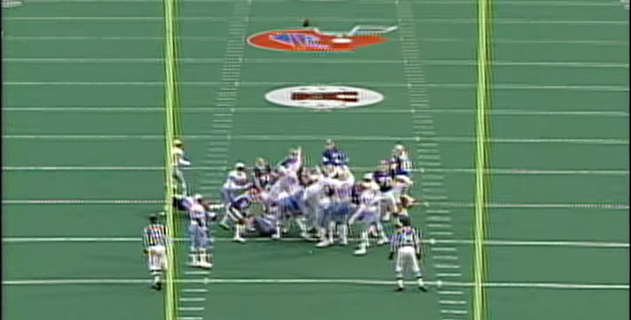 The football that Steve Christie kicked for the winning points in the Comeback Game landed in the Rich Stadium end zone stands. It has never been seen since that January day in 1993. (Photo: NFL/NBC Sports)

Where is the Comeback Football?

25 years later, no one knows where it is.

It’s not on display at New Era Field.  It’s not in the Pro Football Hall of Fame.  It’s not in Steve Christie’s trophy case.  It’s missing.  On the 25th anniversary of the greatest comeback in NFL history, and the greatest game in Buffalo Bills history, it’s time to bring it home.

Last Sunday, the Bills celebrated the 25th anniversary of the team that came from 32 points behind to beat the Houston Oilers 41-38 in overtime.  It brought back fond memories for Bills fans.  The Bills players from that 1995 team gathered during a halftime ceremony, and soaked in the love from a crowd that still vividly remembers every detail of that amazing game.

But in an interview here on Buffalo Sports Page, Christie’s vivid memory dropped one detail that I had never heard.  He has no idea what happened to the football.

“The ball is out there.  Someone has the ball,” said Christie. “The day after, someone called the Bills and offered to sell it to me for $10,000.  I told them where they could put it.  I was not prepared to buy a football I had kicked.  So it’s still out there.”

Steve remembers that the net behind the goal posts was never raised, so the ball went in the scoreboard end zone stands, about 20 rows up.  That phone call looking for cash is the last he’s heard about the most famous football in Western New York.

That got me thinking about what I believe is the most significant piece of sports memorabilia in Buffalo sports history.  I asked Denny Lynch, former Bills public relations executive and team historian.  He has no idea of the whereabouts of the ball.  Same for Joe Horrigan, executive with the Pro Football Hall of Fame.  Canton has Christie’s kicking shoe, but not the ball.

Then, I reached out to prominent Bills memorabilia collector Greg Tranter. He is a tireless archiver of Bills moments, including Scott Norwood’s helmet from Super Bowl XXV.  He has not seen of, or heard of, the Comeback football.

“The Steve Christie greatest comeback field goal football is one of the most significant artifacts in Bills history because it catapulted the Bills to become 3 time AFC Champions and go to Super Bowl XXVII.” It is right up there with Mike Stratton’s Hit Heard Round the world helmet, OJ’s 2003 yard game jersey and Scott Norwood’s Super Bowl XXV helmet.”

Someone in Western New York must know something about the football.  Whoever caught it must have been pretty proud of having it.  I can’t believe it hasn’t been passed down through the years to kids or grand kids.  It’s time to put it where it belongs…on display at New Era Field.

But there are a few complications with getting the ball.  One, what’s it worth?  How valuable is it? Will someone have to be paid to turn over the ball?

Second, how can it be verified?  There were no identifying markings on the ball, like there are with today’s “K” balls.  Other than Paul Tagliabue’s signature, how will we know it’s the real ball? Christie says it’ll be hard to confirm, but there are some markings on the real Comeback football that he and punter Chris Mohr would be looking for.

So here’s my challenge to all Bills fans.  Let’s bring this magical prolate spheroid back where it belongs.  If you know anything about the ball, send me a message through Twitter or Facebook.