Paul Peck: Release of Veterans Does Not Signal Tank 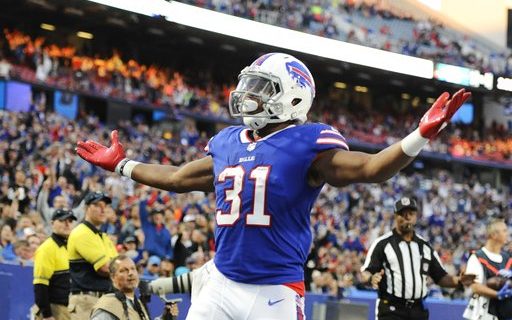 Buffalo Bills' Jonathan Williams (31) celebrates after rushing for a touchdown during the first half of a preseason NFL football game against the Detroit Lions Thursday, Aug. 31, 2017, in Orchard Park, N.Y. (AP Photo/Adrian Kraus)

Release of Veterans Does Not Signal Tank

Just when I thought Bills fans couldn’t get any crazier, desperate, reactionary, unrealistic…or just plain stupid.  Sunday came.  A trio of mediocre, mostly unknown veterans are released by the team, and there is more references to tanks than any World War II documentary.

Yes, I’ll be the first to admit that the releases of Jonathan Williams, Philly Brown and Gerald Hodges surprised me.  Especially Williams.  But to connect the roster maneuverings regarding these anonymous, untested or journeyman players to an overall effort to destroy the season…is just plain wrong.

But then again, if the Bills changed equipment managers (sorry, Woody), some fans would equate that to a predetermined effort to lose as much as possible.

I get it.  We’ve seen the Sabres make an unspoken effort to be as bad as possible.  It worked, and got them Jack Eichel, a player that they’ll lock up for a long time.

But it doesn’t work that way in football.  There are more players, too many variables, too few games, too many uncertainties in the draft (I see you slipping Josh Allen) to control a season this way.

Here’s what the new regime of Beane and McDermott are doing.  The Sunday sweep was part of it.  They are building a team that fits their model of success.  The Sunday sweep was part of that.  That means younger, faster, quicker, cheaper, and more athletic.  The players brought in on waivers to replace Williams and Company are exactly that.  Even if they aren’t all ready to be big contributors this season, they are part of an overall effort to shape this team in image and style of the new front office. Keeping mediocre talents like Hodges and Brown don’t achieve that.  Developing a Connor McDermott or Deon Lacey might do that.

No Names No More

Hodges and Brown were originally brought in here because they were veterans.  But I sense they were only signed to fill spots that the team hoped they could fill with better players.  Or maybe they don’t want to have to pay them for the season as veterans.  They must feel like they have, so both are gone.  Williams’ release surprised me, because he has been impressive this summer and had a good resume.  Maybe there’s another reason that we may soon find out.  Or maybe Williams didn’t buy in to the McDermott process.  If not, now is the time to get rid of him.  Williams hadn’t done enough in one season to earn any benefit of the doubt. Plus, running backs are easy to find.  Maybe Joe Banyard is just as good, or better.  But because he wasn’t a draft pick and didn’t play in the SEC, Bills fans think he’s a bum.

All any Bills fans wants is to see this team have a plan for success.  We all want to see that happen this year, so the drought scoreboard doesn’t add another year.  But that’s unrealistic.  Beane and McDermott have clearly made an assessment of the garbage they were left with, and they’ve decided to take out the trash. That’s why there are only six Doug Whaley draft picks still on the team.  It can’t be fixed in one year, no matter how much people want it to be.  If it could, guys like Brown and Hodges would still be here.

I don’t know if Beane and McDermott are the right guys to turn it around.  But they’re our guys, and they’ve been given the freedom to do it the way they believe.  I’m not saying you have to have patience.  I’m just suggesting that all Bills fans give these guys a chance, and don’t over-react to every move they make.

Park the Tank, and let’s see how this season plays out.