As the picture above shows, at one point I thought the most memorable part of Saturday’s UB-Western Michigan game radio broadcast was a halftime interview with LA Chargers General Manager Tom Telesco. Sorry Tom, you’re not going to make the cut.

Saturday’s seven overtime, 71-68 Broncos victory was one of the most incredible events I’ve been a part of in my 30+ year broadcasting career. It’s not often you witness history. It tied for the longest overtime game in NCAA history. It set a record for most points scored in an overtime game. UB set the record for most points scored in a loss. Bulls quarterback Drew Anderson threw for 597 yards and seven touchdowns. Both are UB school records. The yardage is a Mid-American Conference record, better than Ben Roethlisberger or Chad Pennington or Byron Leftwich.

As the Bulls play-by-play announcer, it’s my job to describe every play while recognizing the history before my eyes. As much as I prepare for each broadcast, I was prepared for none of this. 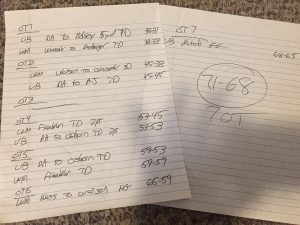 After filling up my printed score summary sheets, this is how I tracked the scoring plays in the 7 overtimes. (Photo: Paul Peck)

The only thing I apparently did prepare for was to not have to go to the bathroom, despite downing two second-half bottles of water. The halftime bathroom break was the best decision I made.

While I didn’t remember saying it, it was pointed out to me that I predicted the wild afternoon in the first quarter.  With the score 10-7 Western Michigan, and following the 3rd 50+ yard play of the game, I said “If it’s gonna be anything like the first four minutes, I better get another scoresheet and you guys better get another snack.  Be ready for one that’s gonna be wild.”

But I was taught by broadcasting greats like Van Miller, Mike Tirico and John Murphy to be ready for everything and anything. So I was ready for overtime, and the unusual college rules. From there, you just let the game happen in front of you. Even if it keeps happening. Seven times.

Set the scene. Give the score. Set up the play. Describe the play. Set up the next play. Rinse. Repeat. That’s what a play-by-play man does.

It’s controlled chaos, especially when you’re in uncharted territory like this. I could not have done it without the great crew around me. Color analyst Scott Wilson was on top of every play, telling everyone why it happened. Host Brad Riter was there to check on stats, and tell us about records being broken. Spotter Mark Murphy was my second set of eyes. Producers Jim Bearor and Kyle Powell made sure we stayed on the air.

At one point, sometime in the 4th overtime, I thought to myself that someone is going to lose this amazing game, and that’s not fair. Neither team deserved to lose.

At one point, in the 6th overtime, I thought that I better have a good call if UB wins because it might wind up on SportsCenter. I hate to think like that, because you want your call to come naturally. I will admit I had one ready. If the Bulls had won in the 7th overtime, I would have called it “7th Heaven.” Oh well. I’ll save that for the next one.

The best part of my job is that no matter how much you expect and prepare for, you never really know what’s going to happen. That’s what’s great about sports, and that’s why it’s a profession for some and an obsession for others. You can be surprised, but you better be ready. I hope I was. 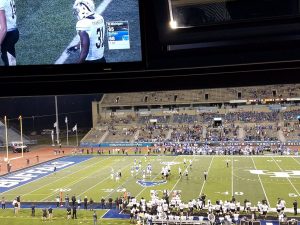 The scene at UB Stadium in the 7th overtime. (Photo: Brad Riter)

People have asked me since the game how my voice held up. It’s fine. Experience told me in the fourth quarter to dial it back a bit in case I needed it for overtime. The other question I got involved my compensation. No, there is no overtime for overtime.

But mostly I’ve been asked what it was like to call a game that many sports fans will never forget. I made no tackles, catches or blocks. I did sweat a bit, but not as much as those amazing players. But I’m honored to be a small part of something special. If I made those folks driving in their car or listening in their homes feel special too, then I did my job. That’s why I love being a sportscaster.

I can’t wait to see what happens this Saturday. If it goes eight overtimes, I’ll be ready.