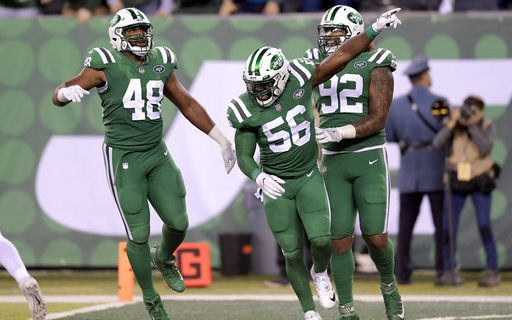 New York Jets inside linebacker Demario Davis (56) celebrates his fumble recovery with teammates Jordan Jenkins (48) and Leonard Williams (92) during the second half of an NFL football game against the Buffalo Bills, Thursday, Nov. 2, 2017, in East Rutherford, N.J. (AP Photo/Bill Kostroun)

Takeaways have been a big reason why the Bills won five of their first seven games.  Then, they stopped.  So did the wins.

I was thinking a lot about this leading up to Thursday’s game against the Jets.  The Bills were an amazing team that did not turn the ball over, while being great at taking it away.  No one will dispute that the interceptions and fumble recoveries were one of the key reasons for the hot start.  I am convinced that it’s a skill, and not just luck, that leads to takeaways.  Raking the ball out, being in the right place, catching the ball when its thrown to you are skills.  But if you watch enough football, you know that that takeaways always involve some luck in the way the ball bounces.

So I wondered.  Can the Bills win games if they don’t get takeaways?  Now most teams won’t win when they’re -3, like the Bills were Thursday. But what if it’s an even turnover margin?  Are the Bills good enough at the straight “football” part of the game to beat teams?  Without short fields from turnovers.  Without the occasional defensive score.  Without the momentum that comes (and goes) from a turnover.

The answer against the Jets was clearly, no.

Without turnovers, a team needs to control the line of scrimmage, run the ball, stop the run and get good quarterback play.  Basic stuff that we all know.

But these are questions that I have about the Bills, especially after Thursday.  They were dominated on both sides of the line, couldn’t stop the run, and generated no consistent offense via the pass or run.

Yes, it’s just one game.  Maybe it was just a bad match-up against an inspired New York team.

But my main question still has no answer.  Following four straight games of three or more takeaways, I saw a Bills team that didn’t look the same.  Certainly it was a score that didn’t look like we all thought it was.

I have my doubts that Tyrod Taylor is a good enough quarterback to lead long drives consistently, without the benefit of short fields via turnovers.  The run game hasn’t been consistent enough this season.  Lately, the defense has shown some holes in pass defense and scoring defense.

The turnovers will happen.  The Bills are good enough at it to make me feel that way.  Does that mean +3 every week?  Probably not.  So there will be games when turnovers are not a factor.  Are the Bills good enough to win those?  Some of them, yes.  How many?  That’s a answer we don’t have yet.  Some lesser teams on their schedule (Colts, Chargers, Dolphins) will turn it over because that’s what bad teams do

But can the Bills beat the Chiefs, Saints or Patriots without the turnovers?  My gut tells me no.

The real answer will come over the final eight games of the season.