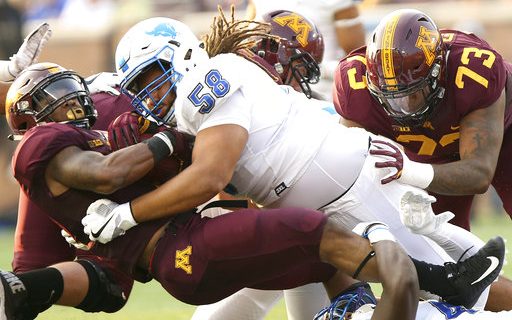 They were two of the biggest Bulls questions coming into the 2017 season. After the season opener in Minnesota, the answers are positive and encouraging. Saturday, at least one of those questions will really be answered.

After struggling all of 2016, the Bulls defense had to improve against the run. With mostly the same players back, the UB defense took a big step forward last week. They held the Gophers to 3.3 yards per carry. Minnesota’s outstanding backs Rodney Smith and Shannon Brooks never broke free. Their longest run was 16 yards. The pursuit was excellent, and the Bulls tackling was some of the best we’ve seen. They will need to do that all again Saturday against an Army triple-option attack that was 2nd in the NCAA in 2016, and ran for 513 yards last week against Fordham.

Big question #2 was UB’s wide receivers. The top three from last year were gone, and there were a lot of new, untested players in the group. Well, Anthony Johnson is a no longer new and certainly not untested anymore. His breakout 11 catch debut was two shy of the school record. He showed size, speed, hands and athletic ability the Bulls haven’t had at receiver since the glory days of Alex Neutz and Naaman Roosevelt.

It’s just one game, but these two encouraging signs could have a lasting impact on the rest of the season.

Bull Session Trivia: Anthony Johnson is from Rock Hill, SC. That’s a suburb of Charlotte, NC and just over the state line. Two former Buffalo Bills first round draft pick defensive backs are also from Rock Hill. Can you name them?

In the ultimate compliment to Johnson, the Minnesota defense quickly ended their man-to-man coverage schemes and went to a zone defense after Johnson’s 50-yard catch and 16-yard touchdown. If Big Ten cornerbacks can’t cover Johnson, then not many of UB’s opponents will ask their corners to try. Johnson should have an athletic advantage over Army’s corners this week…After the game, Johnson received a call from his cousin Jadeveon Clowney, the Houston Texans superstar. Clowney said he watched the game, and praised his relative’s performance. So now the two biggest defensive stars of the 2014 NFL Draft are both rooting for the Bulls this season….In a concerted effort to smartly get the ball in Johnson’s hands, Tyree Jackson threw a lot more bubble screens, quick out patterns and slants than we’ve seen from the Bulls in past seasons….Jackson looked confident running the offense. He made good decisions, and was accutate. The speed of Minnesota’s defenders and pass rushers had more to do with limiting T3’s stats…Gophers coach P.J. Fleck was complimentary of Jackson, “That quarterback, you’re going to see him in the NFL. He is going to be that next MAC quarterback that comes up.”…The Bulls tried two nifty trick plays. A double-reverse flea-flicker was nearly completed to K.J. Osborn. A receiver option almost had Johnson throwing a TD pass to Kamathi Holsey. Lance Leipold says the Bulls will be more aggressive with plays like that this season…Army’s defense ranked 4th in the nation in 2016. They lost some key linebackers, but appear to be the sound and disciplined unit they were last year. Linebacker Alex Aukerman had a sack against Fordham, after 7.5 last season…Defensive end Jon Voit had 1.5 sacks against the Rams…Safety Rhyan England leads the secondary. Army defensive coordinator Jay Bateman calls England “the smartest player he’s ever coached.”

What a way for Khalil Hodge to warm up for the Army game. The Bulls linebacker had a career-high 20 tackles against Minnesota. That was the most tackles by a Bull since 2008 when Davonte Shannon had 20 vs. the Black Knights. Hodge ran to the ball, stuffed the run, and never let a Gopher out of his grip…This week, Hodge figures to be even busier. As the middle linebacker, he’ll be in charge of making sure the Army fullbacks don’t run wild up the middle. Last year, Hodge had 16 tackles vs. Army…Hodge got a lot of help from defensive tackles Justin Brandon and Chris Ford, who were outstanding stuffing the middle. Again, they will be huge against Army…Tim Roberts had a career-high 13 tackles. The Exterminator looked very comfortable stopping the run…Cam Lewis was another star on defense. He was tested often by the Gophers athletic receivers, and his end zone interception was one of the game’s biggest plays…Army won their opener without completing a pass. They were 0/2. That’s not unusual. If Army is playing their game, they don’t need to (or want to) pass…Quarterback Ahmad Bradshaw ran for 177 yards, including a 71-yard touchdown. He had 129 yards on the ground against the Bulls last year…Most of the time, Bradshaw wants to hand the ball to fullbacks Darnell Woolfolk and Andy Davidson. Nearly every play starts with a fake or handoff there. Then, Bradshaw will keep and run or pitch to one of the slotbacks who follow behind him. The Bulls controlled those backs in 2016…Army’s offense returns 10 starters from last year.

The Black Knights are one of the few NCAA teams that run the triple option offense. Navy and Georgia Tech are among the others. It’s unusual, and that makes it hard to prepare for. The Bulls have the benefit of playing Army for the second straight year, so the defensive players are used to the style and the speed of the triple option. But the UB coaching staff also went back to their Division III days to craft a game plan. Defensive Coordinator Brian Borland came with Lance Leipold from Wisconsin-Whitewater. At the Division III level, many more teams run the triple option and even the old wishbone. For the Bulls defensive coaches, Army’s triple option isn’t all that uncommon. They have a good handle on how to stop it. That showed in last year’s Bulls win, when the UB defense controlled Army’s ground game as the game went on.

Bull Session Trivia Answer: Bills first round draft picks Jeff Burris (1994) and Stephon Gilmore (2012) are both from Johnson’s hometown of Rock Hill, SC. The Bulls receiver actually works out with Gilmore in the off-season.